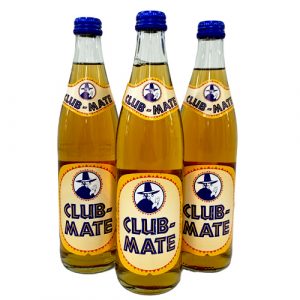 Club Mate is a popular German caffeinated carbonated drink with mate-extract. Since 1924, it has gained more and more popularity. Enhanced by Yerba Mate, the South American caffeine-rich herbal tea, Club Mate is known for its kick without the crash. The soft drink contains half the amount of sugar compared to other popular energy drinks, like Red Bull or Monster, but double the caffeine of a regular Coke or coffee. Popularized in Europe (especially Germany) by the hacker scene, rave culture, electro-pop and digital gaming, Club Mate has become a “cult drink”. Club Mate was prominently featured in the movie “The Social Network” (about the beginnings of Facebook).

Produced in Bavaria at a local beer brewery, Club Mate combines well with rum, gin, vodka, tequila, and more, for delicious cocktails and mixed drinks. Check out our list below for some uniquely invigorating Club Mate cocktails.

Club Cuba is a cocktail made with club mate, rum, and lime juice. Serve with fresh mint and lime wedges for a deliciously refreshing drink.

Oasis (Oase) is a refreshing cocktail made with club mate, gin, sparkling wine, soda water, and ice, combined for a fizzy and satisfying drink.

Dronk is a spin on the well-known hacker cocktail “Tschunk”. For lovers of fizzy drinks, Ahoj Brause is added for extra effervescence.

Matryoshka Doll is a cocktail made with club mate, brown sugar, lime, and vodka, combined to make a uniquely delicious drink.

Made popular in the hacker scene, Tschunk is prepared in the same way as Cuba Libre, but with club mate instead of cola. Crush limes and brown sugar in a tall glass, then fill with rum and club mate.

Kir Berlin is an easy-to-make cocktail made with club mate and sparkling wine, mixed in equal parts and served over crushed ice in a highball glass.