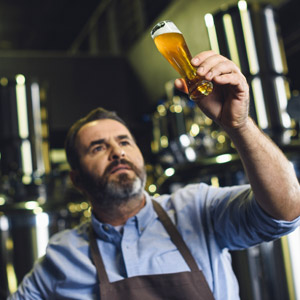 Really, anyone can make beer. There are many starter kits for hobby and home brewers on the market today. But to make a German beer masterpiece takes an experienced and highly trained brewer master. The brew master monks of the Southern German abbeys of Weihenstephan and Weltenburg surely qualify. These renowned brewmaster lineages date back to the 11th century, when the monks were already famous for their suds. However old or young the brewing lineage, the brewing process consists of these 8 steps that make a good German brew (we added the German terms for each step for authenticity):

Mälzerei (malt house): The brewing process starts with malting (Mälzen). In this step the crushed barley or wheat grains are soaked in water to germinate. Then the Grünkern (unripened grain) is dried on a Darre (drying kiln) and roasted. The higher the temperature, the darker the resulting malt. This process determines the color and flavor of beer.

Maischbottich (mash vat): Here the malt is soaked in high quality water to make a mash, and heated to different levels. During this phase, the grain enzymes convert the grain starches into maltose sugars and essential nutrients are dissolved in the mash water.

Läuterbottich (Lauter vat): Undissolved grain particles (called Treber, or spent grain) are removed from the mash, leaving only the dissolved particles, like sugar and other nutrients (called Stammwürze, or wort). The amount of remaining wort makes a beer taste more or less malty. The remaining treber is converted into nutritious animal feed.

Würzbottich (Wort vat): In this step, hops are added to the liquid, between 18 and 40mg of hops per liter. Now called the wort, the liquid is then cooked for an hour. Hops acts as natural preservative and adds essential nutrients and a distinct, bitter aroma to the beer. The amount of hops also determines the size of the white frothy crown when the finished beer is drafted from the keg. The more hops, the more bitter, or ‘hoppy’ the taste and aroma of the beer.

Whirlpool (whirlpool): The wort is pumped through a whirlpool, where remaining particles are removed, and then cooled down to a temperature specified by the brewmaster.

Gärtank (fermentation tank): Brewers yeast is added to the wort, to convert the maltose sugars into alcohol and bubbly carbon dioxide. After a pause to let the desired alcohol level be reached, the yeast particles are removed from the Jungbier (young beer). In the UK and Australia, the spent brewers yeast from this stage is made into nutritious Marmite and Vegemite.

Abfüllung (filling): The final step is to filter the beer one more time and then fill it into barrels, bottles, or cans and deliver the final product to pubs, restaurants and stores. The best tasting beers are consumed at brew pubs from barrels that have just been filled. Tap beer stays fresh only for 30 days.

A Brief History of German Beer, from the first millennium forward
The Guide to German Beer, German beer styles and flavors
Beer and Cheese: A Match Made in Heaven, a guide to pairing beer and cheese
Forty Ways to Describe Your Beer, a guide to describing beer’s many tastes
Is Beer Good for You?, short answer is yes
German Beers Available in North America, the brands you can actually purchase nearby!
Recipes with German Beer, sauces, soups, roasts and more