A brief appreciation of the Oktoberfest classic… 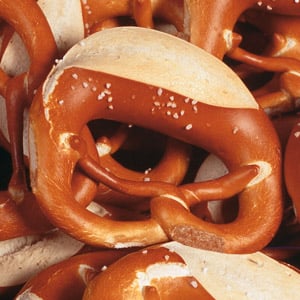 The Bavarian pretzel, a classic Oktoberfest snack, has humble, even prayerful, origins. In 610 A.D., Italian monks made the first pretzels from leftover bread-dough scraps. In fact, the twisted knot of the traditional pretzel shape is meant to symbolize the arms folded in prayer. In Europe, pretzels were once considered a holy food with healing powers. Now, the basic flour and water pretzel has become an American staple, brought to our shores by European immigrants in the 18th and 19th century. 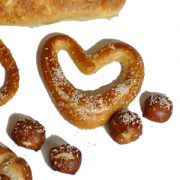 Pretzels, soft and hard, are the third most popular salty snack food in the US by share of total sales. Although potato chips and tortilla chips outsell pretzels, the annual US consumption is still more than 2 lbs. per person. In the Mid-Atlantic states, it’s double that — annual consumption is a whopping 4 lbs per person, earning the region the moniker “Pretzel Belt of America.” Indeed it was the Palantine Germans, later known as ‘Pennsylvania Dutch’, who first introduced pretzels to the New World in 1710. 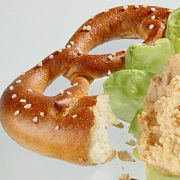 The pretzel, or Brezel as it is known in this region, is especially popular in Southern Germany. Bretz’n are familiar sight at the annual Munich Oktoberfest, where Brotfrauen (bread ladies) carry super-sized pretzels in huge baskets from table to table. The salty snack is an essential accompaniment to the ubiquitous beer and the popular cheese spread called Obatzder. 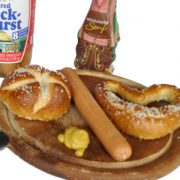 Get your Bavarian Pretzels

While there are hundreds of companies manufacturing pretzels in the US, there are also a variety of importers and bakers selling original Bavarian brez’n with all the crunch and taste you remember from your visit to Germany. These pretzels are made under the strict guidelines of the German Purity Law, using only natural ingredients, and contain no preservatives, flavorings or color additives. Under this law, pretzels may briefly be dipped into food-grade lye (a liquid made from baking soda or other alkaline food-grade substances) which gives the outside the crunchy texture.

You can also make this essential Oktoberfest classic at home. Check out our recipes for homemade Bavarian pretzels, and for Obatzder, the popular cheese spread that often accompanies them.