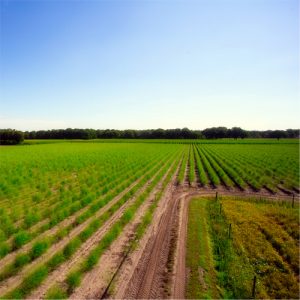 The German Spargelstrasse (asparagus road) runs from towns like Bruchsal in Baden Wuerttemberg to Beelitz in Brandenburg. This area is the springtime Mecca for thousands of global connoisseurs of white asparagus. 750 kilometers long, the road bordered by and thousands of acres full of fresh, white asparagus. Tourist can cut their own white asparagus with the permission of local farmers, or buy bundles of the “white gold” at roadside stands. Travel with us to the most famous white asparagus destinations throughout Germany.

This state bordering the Alsatian region of France is the birthplace of quite a number of culinary treasures, from Spaetzle to Maultaschen. White asparagus is one of these treasures. In the Spargelstadt (Asparagus Metropolis) of Schwetzingen near Stuttgart, white asparagus became the royal vegetable of choice in 1668. This is when Palatine Prince Karl Ludwig planted asparagus in the castle gardens to be served at selected banquets. Ever since, the area has developed and bred numerous types of this delicate, fine-flavored vegetable. In the 19th century, Max Bassermann managed to conserve white asparagus in cans, allowing the general public to have a taste also. The Badische Spargelstrasse features thousands of acres of asparagus crop, starting in the Black Forest Town of Scherzheim and ending in the northern town of Schwetzingen, west of Heidelberg. A little further East in Bavaria, the European Spargelmuseum (Asparagus museum) showcases every detail about how the crop is grown, harvested and prepared for consumption. 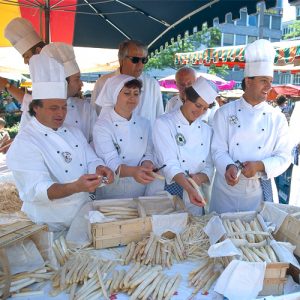 Alongside the North Rhine Westphalian Spargelstrasse, hundreds of small farm-shops between Bonn in the South to Bielefeld in the North sell their “white gold” directly to consumers. Those not in the mood to cook white asparagus at home can visit one of many family restaurants that serve delicious white asparagus meals with ingredients straight from the field. A visit to the Spargeldorf (asparagus town) Scherlebeck and it’s Vestische Spargelmuseum may be a worthwhile educational experience.

This road that stretches all the way from the Netherlands’ border in the West to the Luneburg Heath in the East was officially founded in 1998 by the Verein Niedersächsische Spargelstraße (Lower Saxon Asparagus Road Society) in order to promote tourism. Not surprisingly, the project worked! In the town of Nienburg, interested visitors even have a chance to learn all about the vegetable in the  Niedersächsische Spargelmuseum (Lower Saxon Asparagus Museum). The museum teaches visitors about the crop itself, production, historical growing procedures and how to grow it yourself. It is quite popular with students, tourists and groups, and often hosts classes showing visitors how difficult it is to grow and harvest this crop which, with good reason, is often called ‘white gold!’ 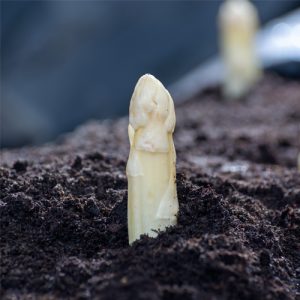 The most famous asparagus region near the German capital of Berlin is the Spargelhauptstadt (Asparagus Capital) Beelitz. It’s a historic town dating back to he year 997 AD and located southwest of Potsdam in the Potsdam-Mittelmark district. In fact, Brandenburg is often called ‘Berlin’s vegetable garden!’ The small town of Beelitz produces close to 50% of Brandenburg’s 15,000 tons of annual asparagus harvest. The price for a ton of Beelitzer asparagus can run up to $4,000, quite a sum for a single vegetable.