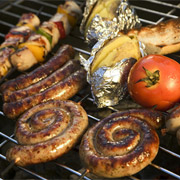 Surely there are cultural differences between Germans and Americans, but not when it comes to the barbecue. Grillen (grilling, or bbq) is equally popular on both sides of the Atlantic.

The newest grilling trend in America: charcoal grilling is on the rise. While 47% of households owned a charcoal grill in 2004, the number increased to 51% in 2013. During the same time, ownership of gas grill decreased from 70% to 63%. Fourth of July is still the most popular day for outdoor grilling. 86% of US households claimed to grill on that day. Other favorite times include Labor Day (75%), Birthdays (72%), Memorial Day (68%), and Father’s Day (48%).