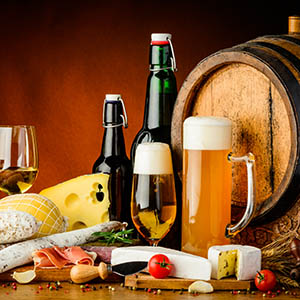 Few gastronomic adventures are more delightful, straightforward and simple than a great glass of beer and a quality hunk of cheese. Cheese and beer enthusiasts offer a couple reasons as to why cheese and beer pair so well. Some say beer is even better-suited than wine to pairing with cheese. Beer is particularly intriguing because of the endless variations that can be created by altering the malt, hops, yeast, and other ingredients.  In this sense, beer has a leg up on wine in its differentiation and versatility. This makes for endless opportunities to explore beer and cheese pairing.

What Makes Beer So Good With Cheese?

First and foremost, it’s all about carbonation. Beer is carbonated, and the bubbles function as a palate-cleanser. (Most wines are still.) Cheese is a rich and mouth-coating substance that creates a pervasive taste on the palate, which can often overwhelm other tastes. The carbonation in beer cuts through the richness and whisks away the remnant cheese. As Carl Crafts from the well-known DC restaurant and bar Churchkey notes, this fizzy attribute of beer has the advantageous effect of allowing “both the cheese and the beer to shine through.”

Second, both beer and cheese have the same roots and related basic tastes: earthy, tangy, or grainy for example. Some emphasize this point more than others, but the fact is that both beer and cheese are foods derived from grass and undergo a process of fermentation.  Beer’s primary ingredients — barley and wheat — are both plants in the Poaceae or Grass family.  In the case of cheese, the grass eaten by dairy cows is converted into lactose. In both cases, the grass is broken down into simple sugars which then ferment.  Mix with different added ingredients, let time work its aging magic perhaps, and, voila! you have beer and cheese.

Third, it bears mentioning that it’s often more affordable than wine and cheese.

Strategies for Beer and Cheese Pairing

There are many recommendations given for which beer to pair with which cheese, but really it is difficult to go wrong. The marriage of beer and cheese is very forgiving, flexible, and fun. You do not need to be an expert to enjoy the pairing.  That said, here are a few general pairing strategies to get you started:

On the other hand, when looking to achieve an inspiring contrast, match a light cheese with a dark beer, or vice versa.  For example, try Camembert or Tilsiter with a Dunkelbier, or Cambozola with a Maibock.

2. Stick with a region

Choosing cheese and beer from the same region is another way to create a great pairing.  Climate, ingredients, and regional craft preferences all play important roles in the making of beer and cheese, and the resultant products are likely to be compatible.

The German state of Bavaria has over 400 cheese and 40 beer varieties and therefore a wealth of pairing options from which to choose. You might try Barossa Washed Rind from Innstolz with Schneider Aventinus, for example, or another of the recommendations from More information can be found on Bavaria tourism site. And here are some beer and cheese pairing recommendations from the Bavarian Brewers Association (Bayerischer Brauerbund e.V.).

Taste is individual, so be bold and experiment. As mentioned above, the marriage of cheese and beer is very forgiving, so it’s time to relax and have some fun!

A Brief History of German Beer, from the first millennium forward
A Guide to German Beer – all varieties explained
Beer and Cheese: A Match Made in Heaven, a guide to pairing beer and cheese
8 Steps to Make a Good German Brew  how German beer is made
Is Beer Good for You?, short answer is yes
German Beers Available in North America, the brands you can actually purchase nearby!
Recipes with German Beer, sauces, soups, roasts and more
Tips from famous brewmaster and author Garrett Oliver
Germany’s Purity Law for Beer (Reinheitsgebot) – explained by NPR