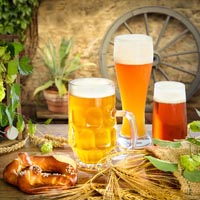 It’s old news that Germans like beer and that they make some of the world’s best, but the emergence of microbreweries across Germany, especially in Berlin, is a recent phenomenon. For decades, Munich went undefeated as Germany’s beer capital, but today, the Bavarian capital is rivaled by the nation’s capital.

With the fall of several state-owned breweries in 1990 following German reunification and the closure of Berlin’s largest brewery, Berliner Bürgerbräu in 2010, Berlin has had to start from scratch. Since then Berlin has kept up with all the latest trends, and beer is no exception. The city boasts a number of microbreweries, most of them located in the hip neighborhoods of Kreuzberg, Neukölln, the city center referred to as the Mitte or Wedding. Each offers some very unique creations, as well as ales, IPAs, wheat beers, lagers, pilsners, and seasonal suds. There are 25 official breweries operating in and around Berlin and dozens of small microbrew pubs with quite original creations. (In Germany, close to 1,300 breweries are in operation, producing over 5,000 different varieties of beer. In comparison, the United States has over 2,500 breweries, most of which are microbrews).

On a recent tour through Germany’s capital, we discovered some jewels worth the introduction to North American beer drinkers. For example, the Hausbrauerei Eschenbräu, located in Wedding, has the typical ambiance of Gemütlichkeit with a cozy beer garden and plenty of indoor seating. You can bring your own picnic basket to the beer garden and enjoy the pub’s Doppelhopf, a very “hoppy” beer. What’s unique about this place is the home-made apple juice sold during fall. The freshly-picked apples are first turned into juice and then into beer. Due to a constantly changing beer menu, be sure to check the place out yourself. Half liters of pilsners start at 2.90€.

Our next stop was the hip neighborhood of Kreuzberg. Here you will find Heidenpeters, and if you’re looking for a microbrew IPA, then this is the place for you! Heidenpeters brews delicious ruby and pale ales, and for something a bit stronger, the Belgian-inspired Saison. These are all smatch batches, so once the fresh beer is gone, you’ll have to try a new variety. The atmosphere is inviting, having a vintage feel to it. This cutting-edge microbrewery offers new specials all the time, so the menu always stays interesting. Like the neighborhood in which this place is located, Heidenpeters is all the rage these days. The prices are also unbeatable with 0.3 liter of beer costing 2.50€.

Our next recommendation is Das Meisterstück, located in Berlin Mitte. This place has a unique atmosphere offering old and new culinary culture side by side. Das Meisterstück boasts a large menu of simple meals, such as an open-faced, crusty rye bread topped with sauerkraut and Nieheimer cheese. The prices for a half liter of beer is about 4.50€.

The success of the microbreweries can be traced to the Berliners’ preference to support and buy locally and to reward creativity, such as the emerging art of Braukunst (the art of brewing). Microbrew festivals have become extraordinarily popular in the last few years like “Craft Beer Days Berlin 2013” and “Braufest Berlin 2013.” Here, visitors get an in-depth tour of how beer is made. Those looking for a place to stay for a night or two and not forsake their beer can can choose the Brauhaus in Spandau, part brewery, part hotel, and all fun. Tours are offered showing visitors the entire brewing and fermentation process.

History buffs will visit the Berliner-Kindl-Schultheiss brewery, located in former East Berlin, and one of the largest breweries here. The production is housed in an old building dating back over 150 years. If you’re in the mood for name brand beers, then this is the place to be. Another popular hangout with beer hall style atmosphere, space for large groups and a huge selection of microbrews is the Altes Mädchen Braugasthaus.

For those aspiring to become a brew master, the Versuchs- und Lehrenstalt für Brauereiwesen in Berlin (VLB) (Research and Teaching Institute for Brewing in Berlin) will teach all that there is to know. Students can anything from workshops to university-level courses in art and science of brewing. Those who don’t live close to Berlin can even take brewing classes online. The courses range from brewing for beginners all the way to advanced brewing levels. The VLB hosted an international congress for the brewing and malting industry in October and continues to reach out to brewing professions all over the world. Micro brewing will remain an art form in a city as creative and dynamic as Berlin.

For instance, in the United States, the number of breweries has skyrocketed since 1980, when the country had fewer than 100 breweries. Now, the United States has over 2,500 breweries, with microbreweries representing a huge part of this increase. (All About Beer, p.10 November 2013)

As you can see, the proliferation of microbreweries is not just a Berlin or a United States thing, but it will be exciting to see how Berliners will create new types of amazing beer.