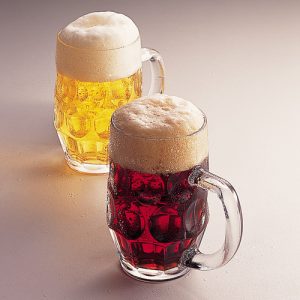 If you can’t eat it, drink it. That’s the basic idea behind the Bock beers customarily consumed between March and May in Munich and other German cities. Bock beers such as Maibock, Doppelbock (Starkbier) or Triplebock are dark and sweet, with a taste somewhere between toasted bread, coffee, and caramel and provide the nutritional equivalent of a rye sandwich. They are integral to Germany’s rich culinary spring traditions.

The invention of Bockbier

Contrary to common belief, Bockbier did not originate in Bavaria, but in Einbeck, a small town in Lower Saxony about an hour south of Hanover. Breweries from Einbeck produced great tasting beer as early as the 1230 and demand for Einbecker beer grew far beyond the borders of the Hannover kingdom. In order to keep the beer fresh for long journeys to market, Einbecker brew masters retained more than 16% of the malted barley solids called wort as natural preservatives in the barrels. As the story goes, Prince Maximilian I, who ruled Bavaria in the early 1600s, was very fond of Einbecker Beer, but wanted to have it brewed in his hometown of Munich. In 1614 he hired brew master Elias Pichler to produce this top-fermented, high wort-content dark beer in Munich. The strong Bavarian accent morphed the name of the beer to Oinpökish Bier, which over time became Bockbier. (There’s no etymological connection to the German word Bock, which means male goat.)

A group of Bavarian monks from the order of Francis of Paolo, called Paulaner, lived in the monastery of Neudeck ob der Au (today in the heart of Munich) about the same time that Pichler came to Munich. They strongly observed the fastening rule, but must not have liked the hunger pangs of 40 days of Lent. Food was forbidden, but liquids were not. Already familiar with the craft of brewing, they adopted Pichler’s recipe, but upped the alcohol and doubled the amount of residual malt. Out came the Doppelbock or Starkbier. The Paulaner monks called this new beer “Blessed Father” or “Sankt Vater.” The name later morphed into Salvator (savior, in Latin) as this beer is still known today. As word of this new beer spread, Munich residents flocked to the monastery for a taste. In 1629, Prince Maximilian permitted the monks to produce their beer in greater quantities and sell it to the public, providing the monastery with a steady income. And while the Neudeck monastery eventually became a correctional institution, the Paulaner brewery has continued to produce delicious beers under private, professional ownership until today. Those beers include Helles (lager) and a variety of bock beer, such as Bock, Doppelbock (Starkbier), Eisbock, and Weizenbock. Many other breweries followed suit, adopting the “-ator” suffix, such as the Maximator, made by Augustiner, and Triumphator, from Lowenbrau. Despite strong competition, the Paulaner Brew Pub and Beer Garden on the Nockherberg, close to the original brewery, remains a focal points of the annual Starkbier Festival.

“Oktoberfest in March” – the Starkbier Festival

Munich’s annual Starkbier Festival in March is a testimony to the fact that Bavarians rarely miss an opportunity to have a fun time involving beer. This festival, which reportedly started as early as 1751, is less crowded, loud and exuberant than the Oktoberfest. It’s more known by Bavarian insiders who enjoy beer tents and brass band music and a sweet, dark, malty brew and call Starkbier “spring’s health tonic.”

Similar to the Oktoberfest, tapping the first keg is a ceremonial event attended by Bavaria’s rulers. In centuries past the Kurfürst (Prince) attended; today it’s the state governor and his ministers. Once the keg has been tapped, the brew master hands the governor the first stein filled with Doppelbock (Starkbier) with the words “Salve pater patriae! Bibas, princeps optime!” (Latin for “Welcome, father of the fatherland! Drink up, great Prince.”) Then, in the good-natured, rustic Bavarian way, comedians poke fun at the governor and other dignitaries, a process called derblecken, Bavarian slang for “licked” or “ridiculed.”

Then the social part of the festivities begins. Wait staff in traditional costumes carry 10 or more steins in one haul to hundreds of guests sitting on wooden table benches in one of several large beer tents or brew pub beer cellars. Most experienced Starkbier Festival guests will not even finish one liter: they know how quickly the alcohol rich, sweet beer can go to the head. A few imbibe too much and will pay the price when they go out to the fresh air. As it is with all indulgence foods: moderate consumption can actually improve your health, too much is detrimental.

What makes Doppelbock so strong?

Starkbier did not get its name from the elevated level of alcohol, which is about 2% to 4% higher than regular German lager, or Helles. The name “Stark” comes from the amount of dissolved malt in 1 liter of beer, called Stammwürze (original wort). These sugar (starch), protein, and vitamin solids comprise between 11% and 13% in regular lager; Starkbier has between 16% and 20%. This means that a 1-liter Mass (beer mug) contains between 160 to 200 grams of malt, equivalent to 4 or 5 slices of solid bread or 600 kcal. No wonder the monks felt satisfied during Lent!

The flavor profile of bock beers, whether a light colored wheat bock or dark amber doppelbock, ranges between toasted bread, coffee, cloves and caramel. According to the Brewers Association’s Food Paring Guide, bock beers fit well with cheese (our recommendation: semi soft cheese from Allgäu), chocolates, spicy Thai or Korean dishes, and duck or roasted meat dishes. Starkbier should be consumed at cold temperatures at a maximum of 7 – 8 degrees Celsius, or 45 degrees Fahrenheit.