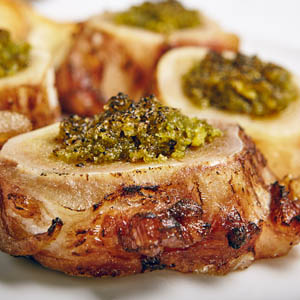 Bone marrow—the soft fatty substance inside of a bone—may not look or sound appealing to everyone. Yet, it is a standard ingredient in Oma’s Küche, Grandma’s kitchen, in other words: classic German cuisine. In recent years it’s become trendy as an appetizer in hip restaurants, as an ingredient to make dumplings and sauces or as hot soup in the paleo diet.

Brodo in NY has sold bone broth takeout since 2014. Trendy restaurants like Rose Lisbet in Berlin or the Schoon Bakery in Cape Town, South Africa and The Blue Ribbon Brasserie in New York feature bone marrow on their menu. Prominent German celebrity chef Wolfram Siebeck recommends it in his “Kochbuch der verpönten Küche“ (Cookbook of Frowned Upon Cuisine).

Why bone marrow? Early man smashed the bones of prey to get at it, and animals seem to instinctively know its value—they often go for the marrow before anything else. Bone marrow has been used in cuisines around the world and throughout history, appreciated for both its flavor and nutritional content.

Marrow is high in fat and protein, and has a subtle, creamy nutty flavor, a hint of sweetness, extremely rich. The taste is incredible, either eaten simply with a sprinkling of sea salt or adding to the umami base of a rich, hearty stew. In other words, it’s high quality fuel imbued with tasty vitamins and minerals.

Cultured European diners in the 18th century ate it elegantly, using a special marrow scoop or spoon to remove marrow from bone. Bone marrow is a part of many dishes of the classic European cuisines: bone marrow is a main ingredient Italian ossobuco (braised veal shanks), and marrow bones are often part of the French pot-au-feu broth. Bone marrow has a history in German cuisine in classic dishes such as beef soup served with Markklößchen (bone marrow balls). 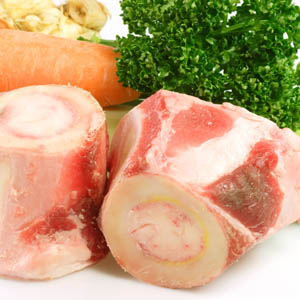 Marrow bones used to be cheap, and most people bought them for their dogs. However, bone marrow and bone broth has become so trendy these days that the bones are getting harder to find and more expensive to buy. Unlike many food fads, bone broth and dishes featuring bone marrow seem to have staying power.

The bone marrow served in restaurants usually comes from beef cows, but the marrow of veal, lamb, and game is also worth exploring. Many prefer the straight, thick shin bones of beef because they make it easier to expose the marrow. When shopping, look for broad bones with big thick channels of marrow. Ask your butcher to cut the bones for you; 3-4 inches long is ideal for roasting. You can also ask to have the bones split lengthwise: this makes it easier to get at the marrow .

Some people like to spoon the marrow right out of the bone when its cooled, or spread it on bread. You can also slow simmer marrow bones with vegetables and seasonings for a nutritious bone broth, or just roast the bones and eat up! Here are some ways to explore using bone marrow: 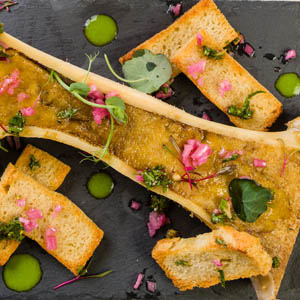 Bone marrow makes a great appetizer, sometimes called the “poor man’s foie gras.” Roast beef bones at 400 degree Fahrenheit for about 20 min, until the marrow is soft enough to spread, but not too liquid. Fat will leak from the bottom of the bone, and you want all of it, so use a pan or foil to catch the drippings. When the marrow begins to bubble slightly, it’s ready to eat.

Scoop out the marrow and spread it on to toasted white bread or fresh, crusty rye bread, season with salt and parsley and enjoy. The crunchy texture of the bread contrasts with the soft mouthfeel of the warm bone marrow and the distinct nutty, savory flavor with a light roasted note. Consider an accompanying salad of parsley, shallots and lemon juice for contrast with the richness of the marrow.

Soaking the split bones in salty water overnight before roasting is recommended to extract the blood from the bone and produce a firmer marrow that is easier to roast. 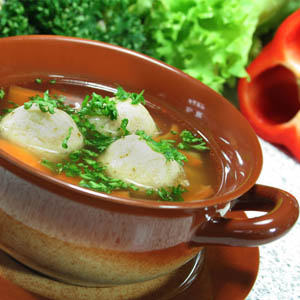 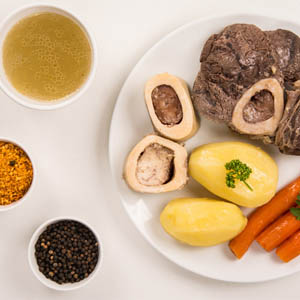 Bone broth is made by cooking bones in seasoned water and vegetables for up to 24 hours. The bone marrow dissolves during the cooking process adding flavor and texture. The bone’s minerals and proteins dissolve as well, providing a healthy boost. The liquid is then strained and served hot, seasoned with other ingredients.

Bone broth is a favorite dish in the paleo diet, a diet which restricts food choices to only those foods consumed during the stone age, such as grass fed meat, fish and seafood, nuts, legumes, fresh fruits and vegetables.

How did bone broth become the elixir du jour? To be clear, there’s nothing all that new about bone broth. Around the world, cooks have been using the bones of game and livestock to make rich, nourishing broths practically forever. And meat broths have been touted for their healing and restorative properties for centuries. They are reputed to boost the immune system, and an age old remedy to cure the common cold. Proponents of the soup assert that bone broth can help with a variety of ailments—from improving joint function and helping wounds heal faster, to strengthening the immune system and rebuilding bones.

These benefits may be supported more by anecdotes than research at this point, but the deliciousness is a fact! So we dare you to try it—go buy some marrow bones, and get to work!