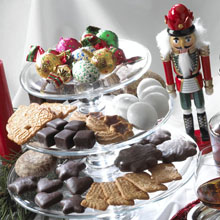 Baking Christmas cookies is a beloved holiday activity and the Germany bakes a large variety. Following is a list of classic German Christmas cookies, which would make a tried and true German goodie assortment for your advent party, Christmas stockings or Tannenbaum (fir tree) treats.

Nürnberger Lebkuchen. The city of Nürnberg was once a medieval trading hub for spices and other fine food ingredients. It’s no wonder that Nürnberg bakers of the Middle Ages used a lot of oriental flavors to spice up Lebkuchen, already a popular Christmas treat in the 15th century. Many of today’s Lebkuchen producers are still located in the vicinity of this enchanting city with the world-famous Christmas market. The most common brands of Lebkuchen from Nürnberg include Lebkuchen Schmidt, Ifri Schumann, Wickelein and Haeberlein-Metzger. Of course, great tasting Lebkuchen also hails from manufacturers in other cities and regions, such as Bahlsen (Hannover), Lambertz (Aachen), Pertzborn (near Bonn), Weiss (Augsburg), Frenzel (Pulsnitz near Dresden), Schulte, and many small artisan bakeries all around the country.

Incidentally, Nürnberg is also home to the International Toy Fair and Germany’s largest toy museum – a one stop shopping location for Santa.

Lebkuchen has been called pepper, spice, or honey cake over the centuries. The dough is sweetened with honey and flavored with a range of oriental spices, including anise, cinnamon, cloves, cardamom, coriander, ginger and nutmeg. Instead of yeast, true Lebkuchen bakers use either Hirschhornsalz (hartshorn or ultetak salt), Pottasche (potash), or both, as rising agents. Some German spice companies, such as Alba or Edora offer specialized spice mixes and rising agents for the home baker. Lebkuchen from Nürnberg are made without any flour, using ground nuts or almonds, as well as some candied orange or candied lemon. The bottom wafer of a Lebkuchen is called Oblate which are available from German producers like Hoch Oblaten.

Aachener Printen. The city of Aachen, also known as Aix-la-Chapelle, was the residence of Charlesmagne in the 8th century, later a place of coronation for German kings, and is today one of the premier academic and technical hubs of Germany. Moreover, the city is the birthplace of the Aachener Printen, a different kind of Lebkuchen. The ingredients are flour, water and sugar beet syrup; no fats, like butter or nut oils, are used. Rising agents are, again, hartshorn salt or potash. The dough is seasoned with a wide variety of oriental spices, but some varieties contain herbs. The baked Printen are a bit harder than Lebkuchen and taste different, more herbal. The geographical origin of the Aachener Printen is protected by European law. Lambertz and Nobis are some of the brands of Aachener Printen available in North America.

Dresdner Dominosteine are pralines with a base of lebkuchen, topped by a layer of either sour cherry or apricot jam and a layer of marzipan and glazed by milk or dark chocolate couverture. Dominosteine were invented in Dresden in the 1930s by confectioner Herbert Wendler and quickly gained popularity in Germany and Austria. Today, the Dresden-based sweets company Dr. Quendt produces Dominosteine based on the original recipe and sells them as Lebkuchenkonfekt. Other producers include Niederegger (famed for their marzipan), Lambertz, Kinkartz, Wicklein and Schulte.

Dresdner Stollen are cakes rather than cookies, but should be mentioned here because they are an integral part of a German Christmas cookie assortment. Arguably, the best German Stollen products available in North America come from Dresden, made by bakers like Emil Reimann, Dr. Quendt and Kreutzkamm. Brands from other German cities include Coppenrath, Oebel, Kronen and Bahlsen. More on Stollen can be found here.

Pfeffernüsse (literally pepper nuts) are Christmas cookies that neither contain pepper nor nuts. They are made from flour, honey or molasses and a spice mix similar to what is put into Lebkuchen and covered in a confectionary sugar glaze. Some products contain candied orange or lemon and a chocolate glaze on the bottom. Originating in the Middle Ages in the Lower Countries, west of the Rhine river, Pfeffernüsse are fairly hard to bite when they come out of the oven and soften over time. Dunking them into hot tea before the first bite yields especially great taste sensation. The most popular Pfeffernuß brands available in North America include Wicklein, Schlünder, Lambertz, Bahlsen and Schulze

Spekulatius, another invention from the Lower Countries (Belgium, Netherlands and Western Germany), is a short crust pastry typically consumed during the Winter Holiday months in Germany and year-round in the Netherlands and Indonesia. Seasoned with oriental spices like cardamom, cinnamon and cloves, and sometimes covered with almond slices, the Spekulatius dough is filled into wooden forms or cut with wooden stamps that are shaped like animals, ships or religious figures. In fact, the name Spekulatius is said to derive from the Latin word speculari (watcher or guardian), a second name given to St. Nicholas who watches over children yearlong. Hence, Spekulatius cookies still are favorite treats on December 6th, St. Nicholas Day. German Spekulatius brands available in North America include Coppenrath, Lambertz, Wikana and Pertzborn.

Zimtsterne (Cinnamon Stars)are typical holiday cookies made with ground nuts and confectionery sugar. As the name suggests, cinnamon is a key flavor in these Weihnachtsplätzchen (Christmas sweet cookies), which are common treats in many countries. Cinnamon itself originated in Ceylon, today’s Sri Lanka. Sometimes it pays to buy commercially produced cinnamon stars because they taste just right. German cinnamon star brands in North America include Wicklein, Lambertz and Schulte.

Vanilla Kipferl are small crescent-shaped biscuits, made from ground hazelnuts, flavored by Madagascar vanilla and dusted with confectionery sugar. They originated in Vienna, possibly representing the Half Moon symbol of the Ottoman Empire. Vanilla Kipferl are typically made at home, but delicious commercial products are made by Wicklein, Haeberlein Metzger, Lamertz or Kinkartz.

And if you are looking for baking mixes, to make your own Vanilla Kipferl or Black & White Biscuits, check out Kathi baking mixes introduced on our website.