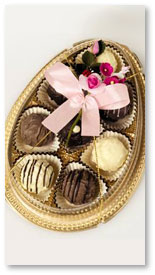 If you are a Facebook user (and who isn’t these days), you’ll not be surprised to learn that the social network site has a page entitled “Giving Up Chocolate for Lent – The Support Group”, apparently intended as a source of comfort “for all the poor souls who gave up chocolate for Lent.” If you are one of those brave people, be warned. We are about to tempt you mercilessly!

The arrival of spring symbolizes renewal of the earth and brings with it the promise of sunny days ahead. For those hardy enough to abstain from confectionery during the 40 days of Lent, spring’s arrival means that Easter is around the corner, bringing with it a sweet release from the torment of a confectionery-free existence!

As in many countries, children in Germany spend the morning of Easter Sunday searching for hidden eggs. While most children expect to find a delicious array of sweet treats, the tradition of giving and eating chocolate and candy eggs is a modern one. The earliest Easter eggs were hand painted hen or goose eggs, and it was not until the 1800s that the first chocolate Easter eggs were manufactured in Germany. They were solid at first, but by the beginning of the 19th century, modern chocolate making techniques allowed the production of hollow eggs that could be filled with other treats. Today there is a dizzying array of chocolate Easter eggs and other confectionery novelties available, some of which we’ll introduce you to later.

Just as Nikolaus brings gifts at Christmas, children are told that the Osterhase will bring sweet treats on Easter Sunday if they have been well-behaved. To be correct, the word Hase actually translates as “hare”, but in English-speaking countries the Osterhase is of course known as the Easter Bunny or Rabbit. Similar to the egg, the rabbit is a pagan symbol of the earth’s fertility and both were associated with Ostara, the Germanic goddess of spring and fertility. The month of April was named after Ostara (ôstarmânoth in Old High German) which subsequently evolved into the word Ostern. In English, the word Easter derives from the Old English equivalent of Ostara or ?ostre. The Easter Bunny tradition, as with many other Easter customs, actually originated in Germany in the Alsace and Upper Rheinland regions. Children left their bonnets and caps out for the Oschter Haws and were told that only good children would receive brightly colored eggs when they awoke. The practice was brought to American shores by German settlers, who arrived in Pennsylvania Dutch Country in the 18th century. The Osterhase has become part of popular culture in the 20th century, although in other parts of Germany Easter eggs were also brought by the Osterfuchs (Easter Fox) or the Storch (stork).

Across Germany, the symbolic Easter Bunny is found in all shapes and sizes in both solid and hollow form. If you pick a chocolate bunny off the shelf in a supermarket in Germany, chances are that it is made by the company Rübezahl Schokoladen GmbH which has been making hollow chocolate figurines since 1953 under the Friedel brand. Today, more than 100,000 hollow bunnies come off the conveyor belt every day, which amounts to a whopping 20-25 million bunnies per year. It would appear that the chocolate bunnies are as prolific breeders as the real ones! The company also produces about the same amount of hollow Santa Claus figurines and more than 15 million advent calendars. Such is the popularity of these products that they are exported to 50 countries around the world including the USA and Canada.

See how hollow Easter bunnies are made.

There are so many confectionery choices at Easter time, so how do you choose? Well, if you are a discerning chocolate-lover or looking for a unique gift, you’ll want to consider the wide range of German Easter confectionery available in the U.S. Feodora chocolate is a perfect example of top quality confectionery for people of good taste. Indeed its namesake Princess Feodora, sister of the last German Empress Auguste Victoria was a gourmet of exquisite taste and her family gave permission for her name and signature and the royal coat of arms to be used as the trademark symbol of Feodora chocolate. Founded in 1910, the Feodora brand has been making exquisite chocolate using the same recipes passed down through generations for 100 years. Feodora offers a variety of beautifully packaged Easter specialties – Easter eggs filled to the brim in a bag or in attractive gift packs, fine chocolate bars, tasty Easter truffles in an elegant gift box as well as metal Easter egg ornaments filled with Neapolitans. These specialties make excellent gifts for the Easter nest.

In Germany, Easter eggs are not just confined to being made of chocolate. Marzipan and its malleable consistency lends itself perfectly to allow for artistic expression, and can be used to make all kinds of fun seasonal confectionery products including Easter eggs and bunnies. Marzipan originated in Middle East, from where it spread with the Arab conquerors to Spain and the rest of Europe. It is made of ground almonds and sugar and can be formed into fun shapes such as pigs and fruits or covered with a layer of chocolate. While marzipan is a popular confection throughout Europe, Americans may not be as familiar with it. Judging by the continuing demand for top quality German imported marzipan confections, it seems they are indeed acquiring a taste for it.

Germany’s northern city of Lübeck is known as the marzipan capital of the world and it is where the finest quality marzipan is found. By law, marzipan that bears the name “Lübecker Marzipan” must contain at least 66% almonds and as a Protected Geographical Indication (PGI), must derive from the city itself. The city is home to the family-owned Niederegger GmbH, which has been a leading producer of marzipan in Germany since 1806. Niederegger produces a range of marzipan ranging from its Konsummarzipan to its Lübecker Edelmarzipan, made from 90% almond paste and only 10% sugar and Niederegger Marzipan made from 100% almond paste.

While the Niederegger factory is busy year-round producing more than 30 tons of marzipan a day, at Christmas and Easter the products fly off the conveyor belts even faster. Their impressive Easter product pallet includes a range of solid, flavored marzipan eggs, liquor-filled eggs and Easter bunny shaped marzipan figures covered in white, milk or dark chocolate. Niederegger confectionery also comes beautifully packed in gift boxes for that special person in your life, or perhaps just as a treat for yourself!

While Easter doesn’t fall until the end of April this year, you don’t have to wait to sample German Easter confections. Check out your local specialty store for these and more German brands. Unless of course you gave up confectionery, in which case, you’ll have to wait a little longer. Sorry, we did warn you!