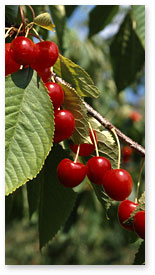 Eating enough fruits and vegetables can be a challenge in our busy daily routines. But with the warmest weeks of the year ahead – bringing the bounty of fresh seasonal produce – adhering to the “five a day” rule should be a breeze. Rather than forcing ourselves to follow strict nutritional programs and diets, this is the time to glory in the season and enjoy healthy berries and other fruits “au natural” as well as ingredients in May Punch, Bowls or other party drinks.

With their refreshing tart and sweet flavors and their high vitamin and mineral content, berries are the perfect summer snack. Unlike citrus fruit, apples and other firm fruits which are available year-round, berries perish quickly once picked, have to be handled with great care and are still largely seasonal. Freshness is always key for produce but it is especially crucial for berries.

In Germany people love fresh fruits and consume an average of almost 200 pounds per capita every year. While North America and Germany have many favorite summer fruits in common, such as cherries, strawberries, raspberries, blackberries and blueberries, other fruits like gooseberries and currants enjoy greater popularity and availability in Western Europe.

Red, black, or white, currants have the highest content of fruit acid of all berries. They also are very high in vitamin C, with black currants coming out on top of the leader board (with 177 mg per 100 g), vitamin E and fiber. Red currants are the most popular and widely available variety. They grow in grape-like clusters on sturdy perennial shrubs. The white currant is merely a less sour and colorless variant of the red currant and is much less common than its red and black counterparts. Black currants usually grow in smaller clusters, producing slightly larger berries. They have a slightly bitter and tart flavor which makes them somewhat less popular as a fresh fruit. The berries lend themselves perfectly to food processing, however. Favorite black currant products are preserves, juices and juice mixes, liqueur and wines.

Gooseberries are the only berries which can be picked in an unripe state, which means they can be stored more easily than other berries. Unripe gooseberries are very tart and are often used to make preserves, compotes or pies and cakes. When the berries are fully ripe they actually have the highest sugar content of all berries and make a delightful summer snack. The color of ripe gooseberries ranges from light green, to golden yellow all the way to light brown and red. Gooseberries are high in vitamin C and fiber and very low in calories.

One of summer’s most popular fruits, cherries are best enjoyed fresh off the tree or soon after being purchased but also shine as the star in many recipes. Two basic types of cherries are available — the sweet cherry (Süßkirsche) which is usually consumed fresh and the sour cherry (Sauerkirsche). The very popular morello cherry (Schattenmorelle) is actually one of the oldest cherry varieties. In Germany it is widely used for baking and cooking but is also processed into many food products, such as preserves, juices, confections, and the famous German Kirschwasser, a potent distilled cherry brandy.

A note about horticulture

The wide variety of seasonal fruits and vegetables which are available year-round, apart from the major commodity crops, is produced by horticulture, a vibrant agricultural sector with a long, rich history. Horticulture means the art of gardening or plant growing and is usually divided into two sections, ornamentals (decorative plants) and edibles (ranging from herbs and medicinal plants all the way to fruit trees). As far as food production is concerned, horticulture only takes up around one percent of the soil in Germany with a considerable output of produce. Horticulture combines very diverse service sectors, such as nurseries and landscaping businesses, and is a very labor-intensive agricultural sector, especially during the various harvesting seasons.

Horticulture is deeply engrained in Germany’s culture. The country has a long tradition of horticultural societies, chief among them the most venerable “Deutsche Gartenbau-Gesellschaft,” founded in 1822. In addition, several German colleges and universities offer Bachelor’s and Master’s programs in Horticulture.