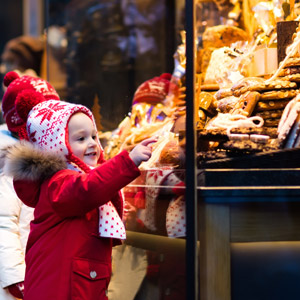 The Christmas season has become incredibly commercial in recent years, with many retailers starting Christmas promotions and decorations as early as September. In light of this, it may be wise to remember some of the German Christmas traditions of our childhood which made the season mysterious and wonderful, and may continue to do so today. Although German and Anglo-Saxon holiday traditions are now inextricably linked, there are some noteworthy differences worth exploring. Here are ten of our favorite German Christmas traditions, with some historical background, anecdotes and even delicious recipe suggestions. 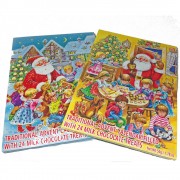 The Advent Calendar counts down the four weeks leading up to Christmas Eve and is one of childhood’s greatest memories. Every day during the Advent season a new door on the Advent calendar is opened. Each opened door proceeds to reveal a sweet chocolate! The Advent calendar tradition began with plain cards with paper backings and 24 “windows” that opened to reveal Christmas scenes. Today you can get original German advent calendars with religious motifs and advent calendars containing cute figures or chocolates for boys and girls. You can even buy naughty calendars for grown-ups if you want to spice the Christmas season up! 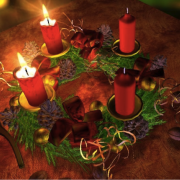 Many families in Germany put an Advent wreath on the living room table the fourth Sunday before Christmas. The wreaths have four large candles and, traditionally, pinecones and berries. As lights are dimmed, the whole family gathers around the wreath. As one, they spend a quiet, reflective hour together. Some families may sing Christmas carols or enjoy a child’s performance on the flute or piano. Others may watch an afternoon family movie. This may include having hot chocolate, tea, coffee or glühwein for drinks. Additionally they may munch on stollen, cookies, marzipan chocolate, roasted chestnuts and fruits. Each Sunday before Christmas a candle will be lit until all four candles are lighting the room. The Advent wreath tradition is especially observed in households where the decorated tree is not revealed until Christmas Eve. ‘Till then, the Advent wreath provides the heart-warming candlelight and evergreen aroma throughout the month.

In Germany, December 5th is a very special night. Children place a freshly polished pair of boots in front of their bedroom doors. They do this in the hope that St. Nicholas and his assistant Knecht Ruprecht will visit their house. While there, perhaps he will leave a little gift in the boots, such as chocolate, nuts or fruits, or a bag of gummy bears. On the morning of December 6th, parents have no trouble getting their children out of bed! They will already have snuck out of the bedroom to peak at what St. Nicholas has brought them. However, not all children are that lucky. St. Nikolaus only brings presents to those children who are generally well-behaved throughout the year. Those who were not may find a piece of coal in their boots, courtesy of Knecht Ruprecht, who carries a sack of coal on his shoulders. 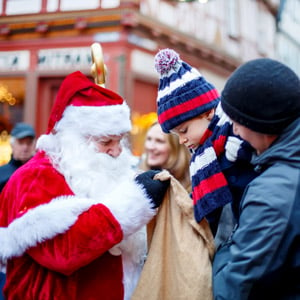 Sankt Nikolaus’ Practices
While Sankt Nikolaus dresses similarly to his American counterpart, he does not drive a sleigh or come down the chimney. In some households, children may actually come face to face with Nikolaus! The imposing Saint (played by a family friend) asks the children whether they have been naughty or nice. Lying is pointless, because Sankt Nikolaus knows everything! He carries around a record of each and every child’s good and bad behavior in his golden book. His assistant Knecht Ruprecht is a menacing figure whose role is to frighten children into good behavior with threats of being spanked. However, Sankt Nikolaus is a goodhearted character who simultaneously exudes gentleness and authority. In fact, the German Nikolaus is based on an actual person. Nikolaus was a popular bishop who lived in Asia Minor (modern Turkey) during the fourth century and became a legend due to his humble and generous nature.

What About Kris Kringle?
So how did St. Nikolaus become popularly known as Kris Kringle? With the Reformation came a movement away from the worship of saints, and the tradition of giving and opening gifts was moved to Christmas Eve. Ever since the tradition is that gifts are thought of as having been brought by the Christkind (Christ Child). This is how Kris Kringle derived his name — it’s an incorrect anglicization of Christkind! In Germany presents are now usually opened on Christmas Eve, December 24th, after a traditional family meal and the singing of Christmas carols, similar to North America. 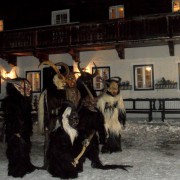 In Southern Bavaria, locals celebrate St. Nicholas’ Night in an alternative fashion. Muscular men in demonic costumes, devilish masks and furry coats march from house to house — this is the fearsome Krampus with his devilish mates. They bang on doors, and, when invited in by expecting parents, attempt to frighten children into good behavior. Occasionally, a recalcitrant teenage male may be dragged by hands and feet outside into the open. There he is dunked in the deep snow several times, much to the delight of his younger siblings. Afterwards, the Krampus and his fellow devils may be found at the local pub celebrating devilishly long into the night. 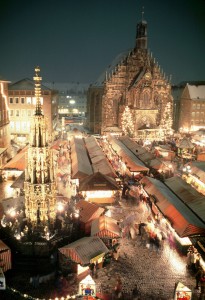 During Advent season the historic city centers of every major German city light up with Christmas markets, known as Weihnachtsmärkte. Holiday lights and decorations captivate locals and tourists alike, and entice them to stroll among the vendors of local arts and crafts and also plenty of food! The Christmas market tradition dates back to the 15th century. Today there are over 2,500 Christmas markets across Germany that invite visitors to enter the festive mood. Markets commonly feature a nativity scene, and vendors offer a wide variety of gifts, including many that are still handcrafted. You can also find a mouthwatering array of foods like grilled sausages, fried fish on a fresh bread roll (Backfisch), and sautéed mushrooms. For dessert there is an unending variety of specialty sweets, confections and baked goods. Thankfully more and more North American cities have adopted this wonderful German tradition! Find a Christmas market near you 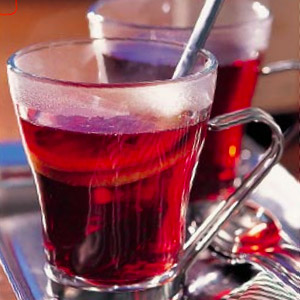 On a cold day, nothing will warm you up faster than a mug of steaming hot Glühwein. This quintessential Christmas beverage consists of hot mulled red wine, with an optional shot of brandy (Glühwein mit Schuss). Most major cities in Germany serve Glühwein in ceramic mugs designed specifically for the local Christmas markets. Similar to the practice in Bavarian beer gardens, when purchasing Glühwein, you pay a deposit in addition to the price of the beverage. You can then either return the mug once finished to get your deposit back or keep it as a nice souvenir. While the designs vary, the mugs usually depict either the respective historic city centers or the Christmas market. To make Glühwein at home, follow our Glühwein recipe. You can purchase spices for Glühwein here! However, if you prefer, you can purchase the ready-made beverage in a gourmet food store near you. 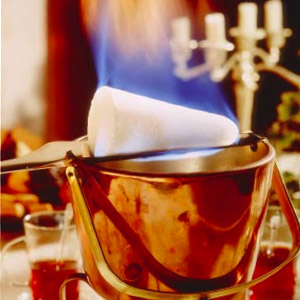 Feuerzangenbowle — this tongue twister is the name of a spectacular German drink, that’s become a popular Christmas season tradition. It involves hot mulled wine, high alcohol-percentage rum and open flames. Although the concoction itself is most likely considerably older, it was the 1943 comedy movie “Die Feuerzangenbowle” which made it widely popular among Germans. The movie has achieved cult status and has created a new tradition among fans. These fans invite friends over for a mug of Feuerzangenbowle and a screening of the iconic film.

‘Die Feuerzangenbowle’ Movie
The movie “Die Feuerzangenbowle” stars the iconic German actor Heinz Rühmann as the writer Johannes Pfeiffer. It begins in a bar in Germany where the middle-aged Pfeiffer and his friends gather around a big pot of Feuerzangenbowle. Pfeiffer, having had a bit too much of this potent drink, decides to dress up as a high school student and return to school. As the son of a prominent well-to-do family he had been privately tutored and missed out on that formative experience. The movie chronicles the mischievous deeds and tricks of Pfeiffer and his young classmates. It is not hard to see why the drink has become a fun relatively new holiday tradition, especially among German students. If you’d like to try it at home, follow our Feuerzangenbowle recipe. 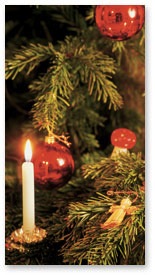 At merely 400 years old, the tradition of the decorated Christmas tree is a comparatively young German custom. Historically, families decorated their living rooms with evergreen branches at Christmas time. This custom eventually evolved into bringing in entire trees. In the 17th century people started decorating their trees with ripe red apples, scrumptious gingerbread and silk flowers to create the illusion of a tree brilliantly blooming in winter. By the 19th century, the Christmas tree had even replaced the nativity scene as the focal point of German Christmas festivities.

The Modern Christmas Tree
Modern Christmas trees are usually conifers such as fir, spruce or pine. The tree is often decorated with live candles or strings of lights, as well as a variety of intricate ornaments. This is a matter of great pride in most families. Some of the ornaments may be heirloom pieces, handed down from generation to generation. Homemade cookies, decorative candy and chocolate are also often added to the ornaments. 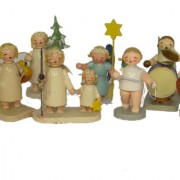 One of the most common Christmas decorations, though, are little wooden Christmas Angels! Hailing from the Erzgebirge, the mountain range between Saxony and the Czech republic, these wonderfully carved wooden figurines depict angels in a variety of poses, often playing their musical instruments. 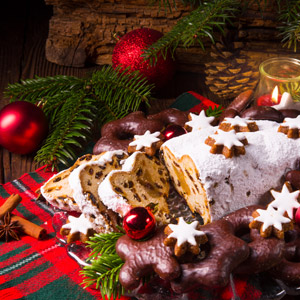 Saving the best for last, one of the most anticipated German Christmas traditions is the Christmas dinner! The traditional Christmas meal features duck, goose, rabbit or a roast. This main dish is accompanied by German delicacies such as apple and sausage stuffing, red cabbage and potato dumplings. Dessert typically includes Christmas Stollen, considered one of the best Christmas pastries in the world! The most famous Stollen, which can be found at many supermarkets, is called Dresdner Stollen. This tasty version bursts with nuts and fruit and is sure to change your mind about the term “fruitcake.” Stollen is shaped with tapered ends and a ridge down the center, symbolizing the Baby Jesus in swaddling clothes. If you’re an experienced home baker and would like to try making Stollen at home, we have a recipe for this on our German Christmas Holiday Baking page.

…And Even More Holiday Foods! 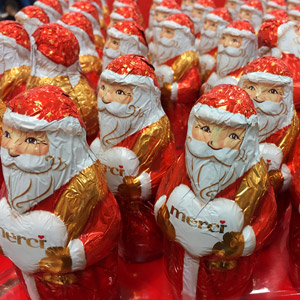