The History of German Holiday Baking 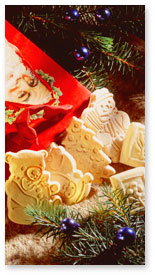 Ahhh, the holiday baking season in Germany! The smells of cinnamon, cloves, ginger, cardamon, caramel and chocolate waft through the house. Children run around in excitement as they savor the taste of cookie batter on spoons! November and December highlight some of our most treasured culinary traditions, many of which possess strong German roots. Whether they are made at home or purchased at holiday markets, cookies are greatly beloved! During this holiday season there are always plenty of sweets to nibble on for every lover of sweets!

Recipes for the Holidays

We have assembled some delicious authentic recipes here that are suitable for both novices as well as master bakers. They reveal much about classic German holiday sweets. These sweets include Weckmännchen, Butterkekse, Spekulatius, Lebkuchen, Aachner Printen, Dominosteine, Pfeffernüsse, Zimtsterne, Dresdner Stollen, Honigkuchen, Makronen and, of course, Marzipan. Some of these are easily baked at home. Others may be best to purchase from a German master confectioner whose products are available in North America specialty food stores. Additionally, you may buy them from us at our website ThetasteofGermany!

The origin of today’s Christmas cookies (Weihnachtsplätzchen) is found in Germany’s medieval monasteries. These monasteries were wealthy enough to afford expensive oriental spices such as cinnamon, cloves, ginger and cardamom. These spices were, and still are, necessary to make the most delectable of holiday sweets! In these monasteries monks with a sweet tooth created all kinds of fine baked goods in celebration of Christmas. Thank God for this truly miraculous Christmas invention!

Christmas cookies come in a variety of forms and shapes. Many are stenciled out of flat dough, and they are a staple in almost all kitchens during the Christmas season! In fact, it is said that even Justin Bieber needed homemade Plätzchen as an inspiration for his hit Christmas record. These may have included the classic Zimtsterne (cinnamon stars), Pfeffernuss (pepper nuts), or Kipferl! All of these may be made at home also! We have plenty of recipes on our website. However, if you prefer to eat them more than to bake them, you may of course purchase them. They are made and exported to North America by many small and midsize artisanal German bakers. These include Dr. Quendt, Coopenrath, Lambertz, Hans Freitag, Oebel, and many others. You may also purchase Plätzchen, or any other dessert, on our website Thetasteofgermany!

The word Stollen means a “log post.” It symbolizes the belief in the load-bearing power of Jesus in Christianity. The earliest document that mentions Stollen dates to the year 1329. Bishop Heinrich of Naumburg (Saale) officially received this treat of yeasty bread, candied fruits and confectionary sugar as a gift. In the middle ages, Stollen was a rather thin bread fit for the fastening of advent. Today, Stollen is found at any grocery store in Germany and all over North America. Naturally, of course, there are differences in quality and taste. The Dresdner Stollen is a specialty of designated origin protected by EU law. It is in Dresden that bakers created the world’s largest Stollen, which weighed 4,200 kilos and measured over 3 meters long.

Contrary to popular belief, the name Lebkuchen is not derived from the German word Leben (life). Instead, it comes from the Latin word libum, which was flat dough offered during church service. In the Middle Ages, monks and churchgoers ate Lebkuchen-style baked goods at Christmas and Easter. It was accompanied by strong beer, which was a source of sustenance during times of fasting.

Ancient Egypt served Lebkuchen-style baked goods, such as pepper cake or honey loafs, as a treat. In fact, Lebkuchen, as it is known today, originated in Belgium in the early Middle Ages. After this it spread eastwards to the city of Aachen in the form of Aachner Printen. Once again, it spread further eastward to the Franconian monasteries. Here monks serving Lebkuchen as dessert added many exotic spices and spread the Lebkuchen-dough onto thin wafers (Oblaten). Lots of Lebkuchen bakers may still be found in the vicinity of Nürnberg, Franconia’s largest city, which was a medieval trading hub for spices and other fine ingredients.