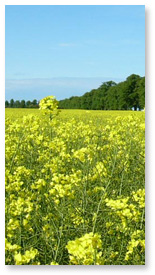 Germany is a key player in the global organic market and also has played a pioneering role in the organic food movement from the very beginning. Today the country at the heart of Europe is well-established as a vital powerhouse of the organic world. Growing awareness surrounding our food supply, environmental issues and sustainability have led to a steady increase in demand for food produced in keeping with natural and organic principles and standards. Adding to this trend is the seemingly unending wave of food scares and scandals which are cause for growing concerns about food safety and quality control.

As a consequence, our demand for organic products continues to grow rapidly, especially in North America and Europe where organic foods have become an integral part of mainstream culture. More and more organic food is imported from around the world to meet the increasing demand for healthy, high quality food produced according to organic principles. What Germany brings to the global table is a strong commitment to organic farming, a state-of-the-art food industry with stringent quality control systems, and a great variety of organic and natural products, from nutritious staples like organic wholegrain breads and mueslis all the way to natural snacks and organic refreshment drinks.

Europe is by far the largest producer of and market for organic food worldwide and Germany is the leading market within Europe. To this day Germany remains one of Europe’s leading countries in terms of both acreage and total number of farms devoted to organic farming practices. As of 2008, just short of 20,000 organic farms (“Biohöfe”), 5% of all farms in Germany, managed over 2 million acres (just over 5%) of farmland adhering to organic standards.

The country at the heart of Europe has also played a pioneering role in the history of organic farming. In fact, the organic food movement was born in Germany in the early 1920s, when Rudolf Steiner created a form of organic farming known as bio-dynamic agriculture (biologisch-dynamische Landwirtschaft). Over time, several organic associations and cooperatives have carved out different forms of organic farming and defined their own set of principals and standards. The four biggest organic associations in Germany today are Bioland, Biopark (website in German only), Naturland, and demeter. In order to remedy the growing confusion created by all these different standards and their respective labels, several organic farming cooperatives and associations have formed an umbrella organization known as “Bund Ökologischer Lebensmittelwirtschaft” (BÖLW). The main goal of this organization is to further develop common quality control systems and effective communications structures between all stakeholders, from growers to the trade all the way to the consumers.

In addition, the German ministry of agriculture, nutrition and consumer protection coordinated and regulated organic standards and in 2001 issued a label which was dubbed “Bio-Siegel”. In order to qualify for this organic quality label, no less than 95% of the product’s ingredients of agricultural origin must come from organic farms. The numbers behind the German Bio-Siegel illustrate huge the market for organic food and beverages. To date, more than 3,000 German businesses produce more than 50,000 products which carry the organic label. Every day an average of 19 new products are submitted for certification. The Bio-Siegel is widely recognized today and makes it easier for consumers to identify products which adhere to the EU’s organic standards. You can find more information on the Germany’s national Bio-Siegel on the homepage of the German Federal Ministry of Food, Agriculture and Consumer Protection.

As is the case for organic farming, retailers specializing in natural and organic products also look back on a long history in Germany. The first alternative retail franchise, Reformhaus, opened its first store in 1900. The organic food trade remained a niche market for most of the century, though. It wasn’t until the early 1990s that conventional retail chains started selling organic goods. Today nearly every major retail chain in Germany offers at least a basic range of natural and organic products. Regular supermarkets currently carry on average about 200 organic products, while some of the fairly new organic-only supermarkets carry up to 8,000 different organic products. Among Germany’s leading organic and natural retailers are Alnatura, Basic, Tegut and Reformhaus.

In keeping with the country’s love of healthy, organic products, Germany hosts the largest agricultural consumer show in the world. The International Green Week (IGW), which takes place each January in Berlin, has attracted around 400,000 visitors in recent years. More than 1,600 exhibitors from countries around the world present their agricultural products and culinary culture. Main themes include organic and natural farming methods, wellness, and renewable resources. Moreover, Germany is also home to the world’s largest organic food trade show, called BioFach, which is held each February in Nuremberg. Nearly 3,000 exhibitors get to present their organic products to international representatives from the industry and trade.

You can find more information about organic farming in Germany by visiting the following web sites:

Organic Farming in Germany for Your Barbecue