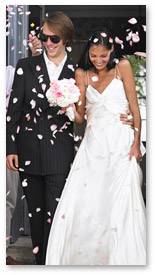 Weddings are truly life-changing events and celebrated in different ways across cultures. Germans have their fair share of unique traditions for the Hochzeit (literally meaning “high time”), including Polterabend, Trachtenhochzeit, and others, described below. (Germany’s special food and drink traditions for weddings, like Hochzeitssuppe and Hochzeitnudeln, are described on the German Wedding Foods page.) Many of these traditions have roots in centuries past, but are still embraced by today’s generations in the days up to and including the wedding day. The activities afterward are perhaps better left to the newlyweds.

An alternative to stag night (Junggesellenabschied) and rehearsal dinner, the Polterabend is celebrated by both bride- and groom-to-be. The Polterabend party is held the day or a week before the wedding and involves the entire family along with friends, neighbors and possibly the entire village. All the guests will bring stuff that breaks and makes a lot of noise, such as plates, glass, earthenware, porcelain, vases, flowerpots, tiles, sinks and even toilets. All of these will be trashed and broken in front of the bride’s home, accompanied by lots of good party foods and drinks. Poltern literally means to rumble (as in Poltergeist), and the broken shards are regarded in Germany as a symbol of good luck. Usually, trash dumps are provided to the parents of the bride to facilitate the cleanup.

You may have seen paintings depicting weddings on farms or small villages by old Dutch, German or French painters, such the one by Pieter Brueghel or Ferdinand Waldmüller. Bride, groom and honored guests appear in their local costumes, and the entire village surrounds the couple with dancing or feasting on wooden benches at long tables. Weddings in local Trachten (costumes) are still performed today, from the North Sea to Eastern part of Austria and to attend one is an experience of a lifetime. These weddings may involve hundreds of people from villages nearby, with performances by local drum and pipe bands, parades by the fire brigade in uniform, or gun salutes by members of the local Schützenverein (hunting club). The participants may dance to a mix of disco, techno-pop and folk music, feast on Ferkel auf dem Rost (roasted pig on the spit), and much alcohol may be consumed.

A popular German folk song called Buuredanz (peasant dance), composed in the 1970s by the Cologne band Bläck Föös, describes in detail the melee of a typical rural wedding. You might enjoy reading the original lyrics in Kölsch (the Cologne dialect), High German and English.

Out of Southern Bavaria comes this fun tradition of “kidnapping” the married bride when the party is in full swing. The culprit kidnappers are the best man, bridesmaids and close friends. They “kidnap” the (willing) bride from the dance floor to a pub, usually one often frequented by the couple in the past. After a round of drinks, they will move to the next local hangout. The husband has to find the gang and pay a “ransom” for the bride. Usually this means he has to pay for the tab left in all the pubs and restaurants by the “kidnappers.” (Pub owners or bartenders are warned ahead of time.) One handicap for the “kidnappers” — they can’t forget the bridal bouquet when taking away the bride. Otherwise, the groom can release the bride from her “captivity” with the bouquet and the best man has to pay the tab.

The bridal chalice is a two-cup vessel hand crafted from precious metal, glass or wood from which the groom and bride drink wine “from the same cup, at the same time, without spilling one drop.” The larger of the two cups is formed like a lady with a long wide dress holding up another, smaller cup. The second cup is connected to the first by a hinge, allowing both cups to tilt in opposite directions. This, in turn, enables two people in love and harmony to drink at the same time (with a bit of skill). It’s a Western European tradition dating back to the Renaissance, meant to bring good luck and happiness to newlyweds, and is based on a fairy tale about a goldsmith wanting to marry a noble princess. Antique bridal chalices have become collectors items and some can be viewed at the Bridal Chalice Museum in Goslar, Germany.