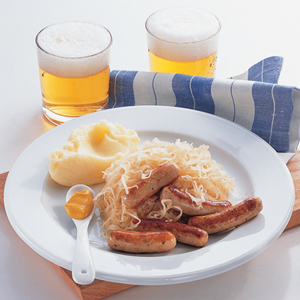 Sausages are newsworthy in Germany.  The country boasts over 1,500 different sausage types, Germans devour over 66 lbs. of sausage products per person every year,  there’s sausage purity law, a Bratwurst museum and the latest trend is “meatless.”  Here is a collection of the latest German  sausage news:

Although these convenient meat snack  was already known in ancient Rome, Greece and China,  sausages became integral to the German cuisine. But over centuries, German master butchers refined those techniques of grinding, stuffing and preserving meat, bacon, water and seasonings – even to a point where they were encoded in law. According to an old document from 1432 found at a library in Weimar (Thuringia), only pure fresh pork and certain seasonings were to be used to make original Thuringia fried sausages. Violators were to be punished severely. The Sausage Purity Law can be seen at the German “Fried Sausage” Museum in Holzhausen, Germany (in Thuringia, between Erfurt and Gotha) – a worthwhile visit for sausage aficionados.

Pork Sausages are not renowned to be “fitness food” – until now. The Fraunhofer Institute (Germany’s leading institute for basic research and development) in cooperation with Bavarian master butcher Josef Pointner developed “Nofatty, ” a pork based sausage which contains less than 3% of fat – but tastes like the regular varieties (which on average contain 25 – 40% of fat, like bologna, salami, or ham) The secret: technically advanced chopping and grinding of lean meat cuts like Schnitzel. During this patented production process, the temperature of the cutter blades is kept at low temperatures which involves constant monitoring and cooling techniques. Thus, the meat releases more of the proteins actin and myosin which allows the ground up meat to bind more water. “Nofatty” “Gelbwurst” or “Fleischwurst” taste like the “real thing” and can be purchased in Bavarian supermarkets.

Contrary to perception, the word “Brat” as in “Bratwurst” does not come from “braten” (German for “to fry”), but from the medieval word “Brät” which is synonymous to “ground up meat.” Although many regional sausages are fried (as in Thuringia and Nuernberg ), the majority of the 1,500 different sausage types in Germany are actually “Brühwürstchen” which means scalded sausages. Among them are wieners (supposedly from the city of Wien = Vienna, Austria made with a crunchy casing), franks (with definite origin in the Hessian metropolis, with and without crunchy casing) and bocks (a bit larger than wieners and franks, with different seasonings, and consumed with the famous Bockbier, which is customarily a dark, strong, bitter tasting brew with 8 – 12% alcohol content. The origin of Bockbier is in Einbeck near Hannover, while the origin of the Bockwurst is presumably Bavaria). Authentic wieners, franks and bocks from the distinguished producer Meica are now available in the United States.

McDonald’s is famous for their burgers, but so far sausages were not on the menu. This changed in June of this year. Customers of the 1,361 McDonalds restaurants can order one of the new “Nuernburgers” – three Nuernberger “Rostbratwürstchen” in a bun with mustard on top. McDonald’s partnered with former soccer champion Uli Hoeness, now president of Bayern Munich and owner of a sausage factory near Nuernberg. His company produces those unique stubby fried sausage which are a regional specialty protected by EU law, made from pork, seasoned with herbs and spices, and fried to perfection. They are also now available in the United States.

In 1949, a Berliner sausage vendor named Herta Heuwer pondered how to bring more flavor and color to the otherwise bland looking Bratwurst she was serving to her customers. Using a blend of tomato pulp, curry powder, Worcestershire sauce and other ingredients, she invented the “Currywurst,” Germany’s ubiquitous and pre-eminent fast food. Today, almost all sausage kiosks (“Würstchenbude”) around Germany are selling the Currywurst and Curryketchup can be purchased in every supermarket. Visitors to Berlin should visit “Curry 36” on Mehringdamm in Berlin Kreuzberg, reputedly the best tasting Currywurst in town and a hit among fans of Currywurst and Pommes (German for French Fries).

When the regional meat producer Rügenwälder Mühle, located in Bad Zwischenahn (Lower Saxony) introduced a line of vegetarian cold cuts in 2015, the company anticipated low sales and suspicious customers. Within two years, the meatless assortment of bologna, salami and Schinkenwurst, generated 20% of the company’s total revenue. Alhough meatless sausages have been around since the 1970s, it is just now that master butchers create the most tasty versions.