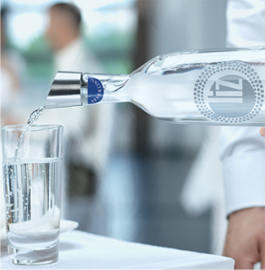 Mineral water is undoubtedly one of the healthiest thirst quenchers for a sweltering summer afternoon.  It contains essential minerals,  tickles the tongue (if you like it carbonated) and is naturally calorie-free. Interestingly, mineral water is the most favored drink in Germany, outranking coffee and beer. Germans drink 142 liters per year per capita, more than most people in other nations. When you ask for water in a restaurant, the waiter usually brings a bottle of mineral water. Why does mineral water play such a unique role in Germany’s cuisine and culinary history? And what are the differences among the many brands and springs? 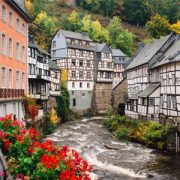 Hard to believe, but Germany’s western region, including the Eifel (between Cologne and Trier), the Taunus mountains (north of Frankfurt), and the Rhön mountains (where Bavaria, Thuringia, and Hesse  come together),  is Europe’s largest volcanic area. Over the course of the past 100,000 years, close to 500 active volcano mountains in that area have spewed lava and hot ashes, pockmarking the landscape around them. Over time, rainwater seeped into cracks and crevices, washing minerals off the stones and sediments on its way down.  That water accumulated as pristine and tasty liquid in subterranean aquifers some thousand feet below the ground.  Eventually, geological pressure forced some of this water back to the surface where early inhabitants of the area collected it. Thus began a long reverence for mineral water. 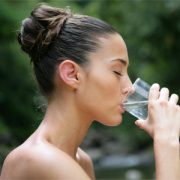 Ancient Romans knew where to go for a bit of relaxation and physical renewal in the Germanic hinterlands: the spas. These thermal springs, which they use to call aquae helveticae (“Swiss waters,” for some reason) attracted politicians and soldiers to enjoy a gulp of mineral-laden healing waters, and bathe and relax in salty thermal springs. Those medicinal natural liquids proved to be effective at lowering blood pressure, healing diseases and promoting a healthy metabolism and digestion. Over the centuries, more than 500 German towns and cities identified local mineral water springs, providing their population and travelers with opportunities to drink from clean water sources or soak in mineral water baths. Many towns incorporated the term Bad (the German word for bath or spa) into their name, such as Bad Homburg, Wiesbaden or Baden Baden. Today, medicinal waters still play a part in Germany’s health care.

Taste and the Emergence of Water Sommeliers

Most people would agree that average tap water is tasteless, save for the content of chlorine or calcium in the water. In fact, tastelessness is the goal. But most natural mineral waters vary substantially in taste, volume, mouthfeel, and aftertaste. In fact, some high-end hotels and restaurants employ professional “water sommeliers” who can pair certain mineral waters with fine-flavored wines and foods in order to maximize the overall gustatory experience. The differences among waters are based on the prevalence of certain minerals and the overall mineral composition. Bicarbonate, for example, neutralizes the acids in water, and generates a neutral, smooth mouthfeel. The presence of magnesium, calcium and potassium makes water either slightly sweet, bitter or salty. Sodium provides a certain “meaty” finish or aftertaste. Carbonated or sparkling water enhances the overall flavor experience and digestion of opulent meals.

Bottled water consumption is up everywhere in the world. The average German prefers their local brand and consumes about 142 liters of Mineralwasser per year, up from about 12 liters in the 1970s.  Carbonated natural mineral water is especially popular. The leading brands are Appolinaris, Gerolsteiner and Rosbacher and the most expensive high-end water is the bottled NEVAS brand which sells for 20 Euro per bottle. In fact, 23 European countries produce bottled mineral waters. The most famous brands – such as Voss from Norway, San Pellegrino from Italy, Evian and Perrier from France and Fiji Water from the Pacific – are sold all over the world. The world’s most expensive mineral water Fillico Jewelry from Japan sells for 190 Euro! 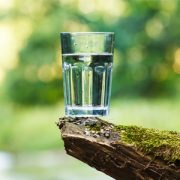 By international law, natural mineral water has to be free of pathogens or contamination and must contain minerals and trace elements that are essential for human health. This differentiates mineral water from all other forms of bottled waters, which originate from municipal wells. The German mineral and drinking water regulation (MTVO) defines exactly what constitutes a natural mineral water and how it must be labeled and packaged. Mineral water is the only food or beverage staple which needs an official stamp of approval by the German federal government. Regular checks by both the bottling companies as well as by external laboratories and food audit authorities review the composition and content of each production batch. Only a few treatments are allowed: bottlers can only remove iron, sulphur, and manganese, or add and remove natural carbonation. In contrast, municipal or tap water may be processed using a variety of methods and chemical additives. Another difference: mineral water has to be bottled directly at the well in order to ensure the high water quality.