In the season of Karneval or Fasching, Krapfen (jam-filled donuts) are the preferred treats for all costumed fools partying on the streets of Cologne, Mainz, Düsseldorf, Munich, Freiburg and many other cities in Germany.  Donuts are king — or in the words of TV cartoon star Homer Simpson: “Donuts. Is there anything they can’t do?”

If you don’t recognize the word Krapfen, it’s likely that you haven’t lived in southern or central Germany (predominantly Bavaria). Perhaps you’re from central Germany (Hessen, Unterfranken or Rheinhessen) where they are referred to as Kreppel, Krebbel(chen) or Kräppel, or perhaps you remember enjoying Fastnachtsküchelchen (literally little Karneval cakes) in the Rheinland Pfalz area or other parts of the southwestern region. In the northern part of Germany, the Saarland and in parts of western Baden Württemberg you’ll need to ask for Berliner in your local bakery. But beware — in Berlin as well as in most of the eastern states of Germany, you may be met with a roll of the eyes or a blank stare, since they are known here as Pfannkuchen — which to confuse things more, means pancake elsewhere in Germany! So, forget the urban legend that mocks President John F. Kennedy for declaring himself a jelly donut (“Ich bin ein Berliner”) in a show of solidarity for the people of Berlin during his famous visit in 1961. The only Berliners you’ll find in Berlin are the people that live there! 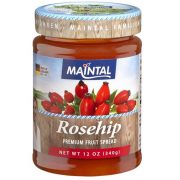 Anyone who has experienced Karneval in Germany, whether as a native or a visitor, will no doubt have had their taste buds tantalized by the sweet treats of the season. One of the most ubiquitous delicacies found in bakeries at this time of year is Krapfen, a European-style donut made with yeast dough, traditionally filled with rosehip jam or jelly and sprinkled with icing sugar. During Karneval, a popular practical joke to play on your friends and co-workers is to fill them with mustard instead of jam and serve them alongside the regular ones. We take no responsibility for the outcome if you decide to try this at home! 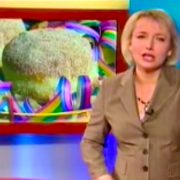 In Dieburg, a town in southern Hessen, the family-owned Bäckerei Mai bakes its Kräppel according to a 60-year old family recipe and during the Karneval period bakes practically nothing but! With an assortment of fillings available, the bakery has made it easy for the indecisive donut-lover. Frau Mai, the bakery owner explains “Wenn’s schon drin ist, ist es zu spät” (when (the filling) is already inside it’s too late), so customers are at liberty to choose their favorite flavor at the point of purchase, and using a special “Kräppel-Füller’ the sweet treats are filled with a choice of plum, nougat, apricot or raspberry jam. Watch a video how it is done. 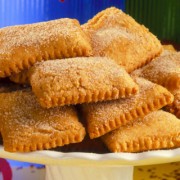 Such is the popularity of the “little Karneval cake” that you’ll find them year-round in bakeries all over Germany, although the most popular time of year to enjoy these tasty temptations is during Karneval and Silvester (New Year’s Eve). While the traditional Krapfen are filled with jam or jelly, many bakeries in Germany offer more adventurous fillings such as quark, chocolate pudding and even Greek yoghurt. One such bakery in Munich called Bäckerei Högl even offers a donut delivery service, delightfully and appropriately named “Call-a-Krapfen.” Call them up and you can have a “Baileys Traum” (Baileys Dream) donut filled with baked vanilla cream and (not-surprisingly) “lots of Baileys” or a “Hot Chicken” creation filled with baked vanilla cream and laced with egg nog, delivered straight to your home or office. The Germans are serious about their Krapfen!

Well, luckily for you, dear readers, you don’t have to travel to Germany or dial long distance for your donuts. Instead you can visit one of the many German bakeries right here in the US or make your own. Or visit our Facebook page to share your own recipes, thoughts and ideas and perhaps some other regional words we may have overlooked. So, bake some Krapfen and shout “Helau”! That’s the customary greeting at Karneval time!