Kale anyone? In Germany, as in the USA, vegan and vegetarian lifestyles have been expanding, despite the stereotypical view of meat- and potato-loving Germans.

Restaurants and supermarkets all over Germany have begun a shift to be more vegetarian-friendly. To highlight this, we have compiled a vegetarian culinary collection. 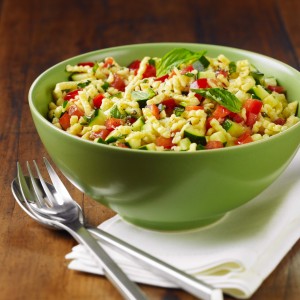 7.3 million U.S. adults followed a vegetarian diet, 1 million of them vegan, in 2008 based on “Vegetarianism in America” study published by Vegetarian Times. An additional 22.8 million people reported following a vegetarian-inclined diet.

The numbers, for a much smaller country, are relatively the same. According to a study by VEBU, Germany has over 7 million vegetarians in their country, which amounts to nine percent of the population.

Coox & Candy, the first vegan restaurant in Stuttgart, first opened its doors in 2011. Shortly after, many other restaurants, supermarkets, and bars followed, making Stuttgart one of the most vegan-friendly cities in Germany. Even at its annual Marienplatzfest (Marien Square Festival) in July, one of the biggest sellers was the vegan hot dog in a bun—you could hardly taste the difference!

The supermarket chain and discounter shop in southern Germany, ALDI-Süd, has also made moves to please their growing vegetarian clientele. Their dominant presence has helped further stimulate vegetarian- and veganism. Directly on their homepage the recipes of the week are vegan or vegetarian geared, confirming the growing trend in Germany. At the end of this past May, the corporation introduced its “V-label”, signifying vegetarian-friendly products.

Although the hearty-eating German crowd still exists, the growing health trend of vegan- and vegetarianism is a reality. We have put together vegetarian and vegan recipes that are great for Meatless Mondays, or any day of the week!