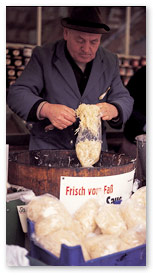 March 17 – It’s that time of year again to scoop the humble “superfood” out of the jar. Sauerkraut is not just a German favorite. The “humble” superfood also has a place in Irish hearts and minds, especially for St. Patrick Day meals.

According to the U.S. Census Bureau, approximately 11.9 percent of the U.S. population (around 36 million) claim Irish ancestry (second in number only, incidentally, to German-Americans). But on St Patrick’s Day, everybody’s Irish so they say! In addition to big parades, green plastic hats and “Kiss me I’m Irish” buttons, you can expect copious amounts of alcohol and plenty of the traditional corned beef and cabbage. Not surprisingly, cabbage consumption in the United States peaks in the month of March. On average Americans consume 9.3 lbs of cabbage per year, according to the USDA’s Agricultural Marketing Resource Center, 1.2 pounds of which is in the form of sauerkraut. 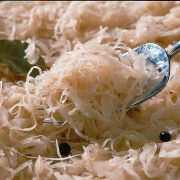 While the word sauerkraut is made up of the German words sauer (sour) and kraut (cabbage) you might be surprised to learn that it was not the Germans that invented it. It was, in fact, the Chinese that first began to ferment cabbage in rice wine over 2,000 years ago. Not until the 16th century did the Germanic population adopt this habit of fermenting cabbage in its own juices, thus creating what we know today as sauerkraut. With the immigration of large groups of Germans to American shores in the 18th century, sauerkraut became an American favorite, first among the German immigrants, then spreading to the rest of the population. Today, you’ll find sauerkraut in every supermarket aisle in the country and it’s a favorite ingredient in many American dishes. After all, what would the Reuben sandwich be with a generous serving of sauerkraut?

How much Kraut is there really in the Krauts

While still a staple in homes and restaurants, the consumption of sauerkraut in Germany has been declining. Today the average per capita consumption of sauerkraut is approximately 2.6 pounds, down from 4.4 pounds 40 years ago. Compare that to the 3.75 pounds consumed by the French and the whopping 49 pounds of kimchi (Korea’s national dish made with fermented cabbage) Germany is no longer King of the Kraut! So, did the Germans really ever deserve the moniker “Kraut” first coined in World War I? Back then, the slur was used by British and American troops to describe their German enemy combatants, but continued to be used as a uncomplimentary nickname for Germans as a whole. These days, Germans are apt to poke fun at themselves and the stereotypical “Kraut-Eating Kraut.” A reporter for Deutsche Welle set off on a quest to find out ‘How much Kraut is there really in the Krauts?‘ 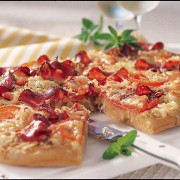 Eating sauerkraut as a side dish may be in decline; however, German foodies are finding so new ways to incorporate it into their diet that sauerkraut is experiencing a revival in Germany. Used as a pizza topping, added to soups, salads and sandwiches, cocktails and even in chocolate cake and donuts, its versatility is clear. So is its reputation as a healthy, low calorie “Superfood,” explaining why Germany’s most famous supermodel, Heidi Klum revealed that the secret to her healthy, lean physique is none other than her grandmother’s sauerkraut soup. Celebrity chefs have discovered the versatility of sauerkraut too. Rachel Ray uses sauerkraut in her signature “Sliced Chicken and Mushroom Raechel” – a turkey Reuben. And, appropriately for St Patrick’s Day, she sauerkraut in her “St-Patty’s Day Reuben Sliders” and St Patrick’s Day Reuben Hash.

Recipes with Cabbage and Sauerkraut

Aside from its versatility and great taste, sauerkraut, is as a well-known “Superfood,” recommended atop the list of foods to include in a healthy diet. At 27 calories per cup, it is a low calorie food and is loaded with folate, vitamin B6, riboflavin, thiamin and vitamin K. It provides one third of the recommended intake of vitamin c and is also rich in minerals such as iron, potassium and magnesium. The fermentation of the cabbage actually INCREASES its nutritional benefits making it more digestible and creating a probiotic effect on the gastrointestinal system. As if all this didn’t qualify it as a superfood, sauerkraut is purported to have an effect on reducing the risk of breast cancer among women. A study by the University of New Mexico found that the consumption of sauerkraut could lower breast cancer risk by 74% and according to the American Association for Cancer Research a Polish Women’s health study also found a link between sauerkraut consumption and a lower risk of breast cancer.

So, on this St Patrick’s Day, pay homage to the humble little cabbage that can!