Leipzig is the birthplace of Richard Wagner, the celebrated – and controversial – 19th-century composer of bombastic operas like Lohengrin or The Flying Dutchman.  The city is also the birthplace of the iconic mixed vegetable and seafood dish Leipziger Allerlei.  An opportunity to talk in more detail about both natives of this famous Saxon city. 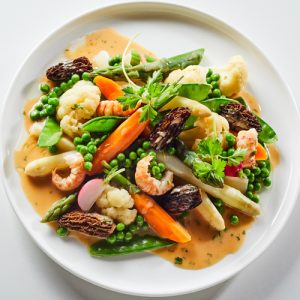 The legend goes that Leipziger Allerlei was invented during the Napoleonic Wars between 1803 and 1815 when the citizens of Leipzig hid the bacon and meat from marauding soldiers, thieves, and beggars and offered their “guests” instead of a dish with mixed vegetables and bits of crayfish from the nearby river Peiße. In truth, the recipe is probably much older. It calls for fresh Möhren, (carrots), Kohlrabi (kohlrabi), Blumenkohl (cauliflower), Weißer Spargel(white asparagus), and Morcheln (morels) to be steamed, or sauteed, and served with butter sauce, pieces of crayfish or pork and bread dumplings.

As this recipe requires some elaborate preparation, only a handful of the traditional restaurants in the city of Leipzig still offer the traditional version. If you are in town, order Leipziger Allerlei at Auerbach’s Keller – Goethe referred to this restaurant in his most famous play Faust – or at the Altes Rathaus, Barthels Hof, Centralapotheke, Gasthaus Alte Nikolaischule, Niemann’s Tresor, Zills Tunnel or Kümmelapotheke. For convenience cooks, the base ingredients are available in canned and frozen formats at most German supermarkets. 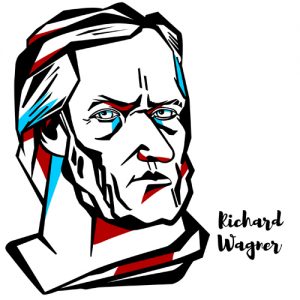 No matter whether you are an opera fan or not, it is likely that you have heard one of Wagner’s compositions. Movie buffs know The Ride of Valkyrie from Frances Ford Coppola’s Apocalypse Now and millions of newlyweds have marched to Wagner’s Bridal Chorus (from the opera Lohengrin), known commonly as the music to ‘Here Comes the Bride.’

Wagner came of age in the aftermath of the Napoleonic wars and at the dawn of Germany’s revolutionary period (the attempt to forge a nation out of many splinter states and establish democracy failed tragically during the 1848 uprising). It was a time when German poets and philosophers prospered. Wagner’s close friends included Friedrich Nietzsche and Franz Liszt, he was a contemporary of Beethoven, Marx, and the Grimm Brothers who were busy collecting German folklore and fairy tales. 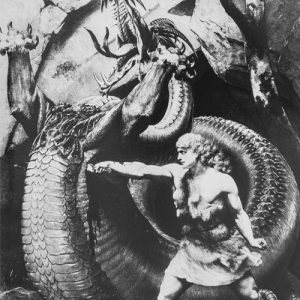 Romanticism was at its peak and as writers re-discovered Anglo-Saxon epics and Germanic mythology; Wagner put them into music. Tristan and Isolde, Nathan the Wise, Parzifal, The Master Singers of Nuremberg, Tannhäuser and his 16 hours, four-in-one masterpiece Ring der Nibelungen reflect a desire to express the mythical power of gods, heroes, and heroines in terms of an orchestral and vocal tour de force. As Wagner captured Germany’s yearning for unity, greatness, and romantic rapture, his main benefactor Ludwig II, king of Bavaria (the original “Swan King”) captured the same spirit in the architecture of Schloss Neuschwanstein, today one of the world’s best-known castles.

Despite being a philanderer and spendthrift, Wagner is one of the most revered German artists even today. A statue of Wagner unveiled on his birthday anniversary on May 22, 2014, adorns the Leipziger Promenadenring, close to his birth home. 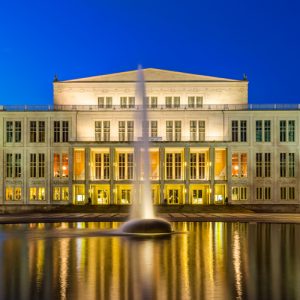 In 1870, Wagner chose the Bavarian city of Bayreuth as the permanent place for his grandiose productions. The city government supported his ambitions and dedicated an area outside the city on the Grüner Hügel (Green Hill) for a grand opera house. And, since 1876, with only a few interruptions, a global fan community of Wagnerians congregates in Bayreuth to watch hours of Wagner’s operas.

Which brings us back to food. Bayreuth is located between Nürnberg and Thuringia, two of the most historic sausage regions of Germany. One of the unique facets of the Bayreuth Festival is the visitors dressed in smoking and evening gowns munching sausages during the intermission. The Bayreuth Bratwurst is made with especially finely minced meat, and relative to other sausages is low in sodium and fat. Gourmets who don’t like meat can also obtain sausages made from lobster or cabbage – a variety reminiscent of the Allelei from Wagner’s home town.