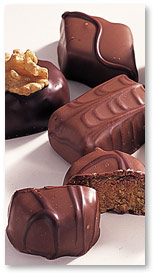 Consider, for example that Valentine’s Day is said to honor three Christian martyrs all named Valentine who lived and died centuries before chocolate was imported into Europe. Indeed, it was not until the 16th Century, during the Spanish conquest of the Mexican Aztecs, that cacao, the basic ingredient of chocolate and native to Mexico, Central and South America, was discovered and brought back to the Old World. So, what’s chocolate got to do with love?

While giving chocolate gifts on Valentine’s Day is more of a modern tradition, the connection between love and the “elixir of the gods” can be traced back to the ancient Aztecs, who associated chocolate with the goddess of fertility, Xochiquetzal, hence the word xocolatl, a bitter, frothy chocolate beverage made with cacao and spiced with vanilla, chili pepper and achiote. The Emperor Montezuma, ruler of the Aztecs, believed this chocolate drink would make him virile, so much so it is said, that he drank 50 cups per day to enhance his libido. It was also believed to fight fatigue, which was no doubt attributable to the mood enhancing effects of theobromine, a chemical compound found in the cacao tree, Theobroma cacao and derived from the Greek words “theo” (Gods) and “brosi” (food), hence the term “food of the gods.” The effect of theobromine on the body is to stimulate the heart thus further contributing to the notion that chocolate is an aphrodisiac.

Well, that explains the connection somewhat. So, what else is known about the positive effects of chocolate on our emotions? Well, it’s widely known that chocolate consumption stimulates the release of serotonin and endorphins into the body, which combine to produce a relaxed or euphoric feeling. A recent study conducted by the University of Middlesex in the United Kingdom found that even just the aroma of chocolate can make people feel less stressed and more relaxed. Moreover, research conducted by the University of Sussex in 2007, found that melting chocolate in the mouth provided a better and long-lasting “brain buzz” and increased heart rate more than kissing! So, now you see why chocolate is so popular on Valentine’s Day!

Chocolate isn’t just considered an aphrodisiac. It has become a lifestyle product and is one of the many foods that trend researchers call “mood foods”. In addition to a growth in snacking, Germans are apparently trending towards so-called “Mood-Food”, or simply put, food that makes you happy and lifts your spirits. Chocolate, not surprisingly, is at the top of the list of those “Seelentröster” or “pick-me-up” foods. Other stimulants that have a positive effect on our mood are spices such as chili which contains capsaicin, that when eaten, stimulates the brain to release endorphins and give a sense of pleasure.

Dark chocolate contains antioxidants which lower blood pressure and cholesterol. The higher the percentage of cocoa, the more antioxidants are present. So, you can see why a combination of premier chocolate made with 77 % cocoa, sweet mango and spicy chili peppers is good for the heart both physically and emotionally! This combination of flavors is one of the many exotic chocolate bar creations in the Cocoa D’Arriba range from the Germany chocolatier Hachez, reflecting a growing consumer preference towards higher quality chocolate with unusual flavors. Learn more about how Hachez hand makes its chocolate, and discover how to best enjoy this gift from the gods!

Hachez is one of many fine German chocolatiers producing a wide range of premier chocolates exported to the North America. Whether you’re looking for a quality gift for your loved one this Valentine’s Day or seeking a delicious de-stresser, make sure to look for German brands such as Feodora, Ritter, Riegelein, Sarotti, Halloren and Milka. Shop for fine chocolates at our online shop!