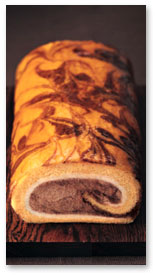 It’s quite amazing how three simple ingredients – almonds, sugar ,rose water – can transform  ordinary confectioneries and cakes into world class pastries.  Marzipan has been used to decorate or to perfect pastries, cakes and cookies for more than thousand years. Originating in the caliphs courts of Mesopotamia, it is today an integral part of German cuisine, whether as ingredient in Stollen and Dominosteine or as Christmas treats in form of pigs, potatoes and pralines.

For our readers’ pleasure, we have obtained and translated two exclusive cake recipes from the pastry chefs of Café Niederegger in Lübeck, arguably the world’s premier spot to get the finest marzipan. These two recipes may tax your pastry making skills, but will top your Christmas menu. Take the challenge, source the best available ingredients and put your talent to work.

Created by master pastry chef Roland Weichbrodt from Café Niederegger in Lübeck for the 200-year anniversary celebration of this venerated producer of the world’s finest marzipan, this cake is made from light layers of dough filled with vanilla cream and topped by chocolate marzipan. A worthy culinary treat for all marzipan fans.

For expert home bakers who have mastered some sweet-making skills and are proud to show them to family and friends, this cake’s marbled surface adds visual attraction to the gustatory pleasure of its creamy marzipan filling.

A little bit of history

Marzipan originated more than twelve hundred years ago in ancient Mesopotamia and the Arab world, where the climate favored the cultivation of almond trees and sugar cane. It required such hard manual labor to shell and grind up the almonds, mix with fine sugar, add rose water and knead the mass into fine dough that marzipan became priced culinary delicacy in the caliphs’ courts.

With the spread of Arab and Byzantine culture throughout Southern Europe, marzipan made its way north through Europe’s trading hubs of Venice and – in the beginning of the 12th century to the ports of the Hanseatic League along the Baltic Sea. Especially the Hanseatic city of Lübeck became a hot spot for marzipan makers, presumably because it was the import hub for almonds and cane sugar from the Middle East. At that time, both sugar and almonds were such expensive foods that only popes, princes and kings could afford this gustatory treat.

In fact, marzipan is said to derive from the Arabic word “mauthaban” which means “sitting king.” This word denoted a Byzantine coin depicting a picture Christ in a sitting position. The coins were introduced in Venice under the name “matapan” or “marzapan” and became the equivalent payment for a small box of confections, which later took on that name. (Another version of the etymological roots of marzipan is the Latin word for “the bread of St. Mark” –marcis panis who was a patron of Venice). Over the next centuries, marzipan became a fixed menu item in the Northern European courts and castles, used for sculptures, as ingredient and even as medicinal remedy.

High quality, aromatic almonds are the key ingredient of marzipan. California is the world’s largest almond producing region today, but the trees also grow in China, Asia Minor and other regions with sub-tropical climate. The best quality almonds are said to come from the Mediterranean regions of Spain and Italy.

The raw dough of marzipan ideally consists only of ground-up almonds (shelled, blanched, cleaned and screened), sugar and rose water. Apart from the quality of the ingredients, mixing them in the right proportions are key elements of quality.

After mixing, the paste is roasted in copper cauldrons in flames of 95 degrees Celsius. The temperature melds sugar carbohydrates and the almond’s essential fatty acids and proteins to bring out those ubiquitous marzipan aromas. After cooling, the marzipan paste is molded into blocks and stored at constant temperatures to mature the aroma.

The more sugar was added prior to roasting, the whiter and sweeter is the marzipan. In contrast, with no added sugar the marzipan taste and looks more like almonds. According to German food law, marzipan paste has to have a minimum almond content of 48% and a maximum sugar content of 35%. The remaining ingredient is moisture (from rose water or similar liquids). German law defines