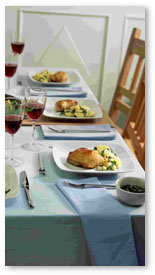 While breaded schnitzel, curried sausages, bottled suds and crispy sauerkraut are usually top of mind when it comes to German cuisine, German chefmanship is gaining reputation inside the country and all over the world. It’s worth to take a closer look at the high culinary arts produced in restaurants between the North Sea and the Alps.

In Germany alone, you can find 11 restaurants that won the 3 stars from Guide Michelin in 2014.  A total of 274 restaurants won at least one Michelin star, one of the most coveted recognition for restaurateurs around the world.

The Vendome Restaurant, inside the Bensberg castle in Bergisch Gladbach (near Cologne), ranked Number 12 among the 2014 TOP 50 world’s best restaurants; # 28 on that reputed list is the  Aqua Restaurant in Wolfburg (between Berlin and Hamburg, where Volkswagen has its headquarters); and the Gault Millau named Daniel Achilles of the Berlin gourmet temple Reinstoff  “Newcomer Chef of the Year 2010”

Thousands of connoisseurs flock to Germany each year to discover the newest culinary innovations. Even some of the fast food chains, such as Wienerwald, Curry 36 or Vapiano (yes, even this pasta/pizza self service joint is a German invention) get  rave reviews.

If you want to try at home, what our acclaimed acclaimed master chefs have created for germanfoods.org,  check out the Recipes from Top Chefs in North America.

A few years ago, Bon Appetit’s restaurant and drinks editor Andrew Knowlton. He states that “in a refreshing departure from the Italian comfort food craze, America is enjoying a Germanic cuisine boom. I chalk it up to the perfect storm of craft beer and charcuterie and the overall pork-obsessed times we live in. One thing is certain: [the number of] German, Austrian, and Czech restaurants are growing …l.”

His observations of seven highly rated German, Austrian and Czech restaurants show a side of Germanic cuisine that the average American does not usually expect to see.

Take the Grüner restaurant in Portland, Oregon. As one food critic commented “The Swabian ravioli stuffed with spinach, beef, and pork was so satisfying I regret years spent visiting Florence instead of Stuttgart.” Accordingly, Grüner was named one of American’s 10 best new restaurants by GQ magazine. Christopher Israel, chef of the Portland based Grüner, was nominated “Best Chef – Northwest” by the James Beard Foundation in their annual awards. “Grüner is an adventure through the Alps and along the Danube River which begins in the Black Forest and ends at the Black Sea,” sazs the website.

A peek at the menu reveals such delectable offerings as grü-ben (house-cured brisket, sauerkraut, gruyère & russian dressing on griddled rye) or spätzle with riesling braised chicken. There are plenty of Germanic offerings at the bar, too, with such drinks as Berg von Asbach (Asbach Uralt brandy, lemon juice, egg white and alpine spiced apple bitters) and of course, plenty of German beers and wines.

Seasonal
Over on the East Coast, Seasonal Restaurant and Weinbar is proud to boast the “best Wiener Schnitzel” according to New York Magazine. This new Austrian restaurant, owned by Wolfgang Ban and Eduard Frauneder, serves classic Germanic entrees such as Tafelspitz, Gulasch, Lammrücken and Späztleand mouthwatering masterpieces like Kaiserschmarrn and Apfelstrudel in an elegant setting, where only the freshest seasonal ingredients are used, hence the restaurant’s name.