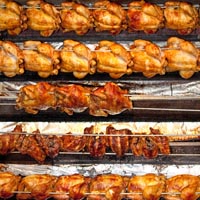 With it’s signature crispy brown, herb-and-spice infused skin, and tender juicy white meat, Brathendl, or Bavarian rotisserie chicken, is one of the most popular meals at the Munich Oktoberfest. This Oktoberfest roast chicken is usually accompanied by a giant pretzel, red radish and a liter mug of Oktoberfest beer.

Oktoberfest visitors have consumed truly impressive quantities of this roasted favorite for decades. More than fifty years ago, in 1961, a total of 88,803 Brathendl were devoured. Thirty years later, in 1991, the number had risen tenfold to 807,710 chickens! But in 2011, Brathendl sales were down 35% to 522,821, possibly because chicken prices were up, to a relatively high price of €9.10 each.

Another reason for it’s decline: excessive beer consumption, which had risen from 5 million liters to 7.9 million liters during the same 20 year time period. Who can eat, when a giant beer stein gets in the way? Nevertheless, Oktoberfest Roast Chicken is still going strong among Bavarians and the 7 million visitors to the Oktoberfest.

Written in 1957 and called Der Ententanz (The Duck Dance) by Swiss composer Werner Thomas, the song could be heard in beer tents all over Switzerland and Germany in the 1960s. A Belgium music producer first recorded the song as a folksy fun tune in 1973. However, it was a remake in 1981 by the Dutch band Electronica that the “Chicken Dance” became an instant hit on the European charts. Possibly this signaled that Abba’s influence was giving way to the shallow-brained, big hair electronic entertainment of the 1980’s.

Taking a cue from the musical charts, the Heilbronn oompah band from Germany brought the ‘Chicken Dance’ to the Tulsa, Oklahoma Oktoberfest complete with tubas and trumpets. Success was instant and today Der Ententanz has sold more than 40 million copies in 42 countries and is a “must have” at every Oktoberfest around the world.

The original song didn’t have lyrics, but the German pop artist Frank Zander added some shortly after the song’s stardom. He called the song ‘Ja, wenn wir alle Englein wären’ (Yes, if we all were angels).

So, wherever you are in the world, if you’re in the mood to celebrate Oktoberfest, then roast yourself a crispy Brathendl. Then pour some Hofbräu, Salvator or Augustiner beer, get a pretzel from the bread basket and start dancing.

Yes, if we all were angels.