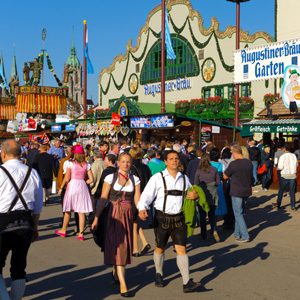 The most popular fair on earth began with the wedding of Prince Ludwig and Princess Theresa of Bavaria in 1810. All the citizens of Munich were invited to the celebrations, and a variety of events and entertainments were held. There were horse races in front of the city gates, and the meadow on which they raced was named ‘Theresienwiese’ (Theresa’s Meadow) to honor of the princess. The royal nuptials happened to coincide with the harvest and the tapping of the new brew — and the marriage of public celebration with the first tapping was sealed. Since 1818 Oktoberfest has been an official celebration in Munich, the beer capital of the world, and Oktoberfest history began.

What a celebration it is! Although horse races are no longer held, Oktoberfest now offers a myriad other attractions. The fairground atmosphere contains carousels, fairground rides and food stands, beer tents, dance floors, and more. By the end of the 19th century, small beer stands representing area breweries were replaced by the first beer tents and halls, which featured dance floors and even bowling alleys. In fact, the biggest tent was set up in 1913 measuring more than 65,000 square yards and seating 12,000 people.

Today the festivities begin by a colorful parade of horse drawn beer wagons and marching bands, following by men and women from the local beer breweries decked out in traditional Bavarian garb. The official Oktoberfest opening is marked at the stroke of noon on the first Saturday when Munich’s mayor taps the first barrel of new beer with the famous cry “O’zapft is!” (it is tapped). Beer may not be served in any of the many beer tents at the Theresienwiese until the mayor has tapped the keg!

Munich’s Oktoberfest revelers imbibe about five million liters of that city’s most famous product in the two-week period, and they’re a hungry group too. Each year hundreds of thousands of chicken, oxen and sausages roast on spits throughout the city, and 45 million tons of fish are grilled.

Oktoberfest is not the time to keep the sweet tooth in check either. Germany’s famed chocolates and candies are dispensed with smiles from booths throughout the festival grounds and it’s the same for its almost infinite variety of cheeses and delicacies.

The world’s biggest beer festival has become a celebration of international stature: more than six million visitors from around the world gather on Munich’s famed Theresienwiese each year for 16 days of revelry, and mini-Oktoberfests take place the world over. Oktoberfest celebrations have caught on in cities across America. The American version of Oktoberfest is usually carried out much like a state fair with plenty of food and carnival rides. North American Oktoberfests feature many of the foods that were brought over by German immigrants, and are a celebration of German heritage, with traditional dress, music, dancing… and lots of good German beer.

To host an official Oktoberfest celebration at home, be sure to serve pretzels and mustard alongside authentic German grilled sausages, imported German beer such as Pils or Hefeweizen, and a selection of quality German cheeses. And, hopefully, the host can offer better seating odds than the typical seven to one at the actual Oktoberfest! Most importantly, remember to say, Prost! or “Cheers!” to the couple that started it all!