The German region of Rhineland refers to the area of land on either side of the Rhine River and consists of the states of North Rhine-Westphalia, Rhineland-Palatinate and parts of the Saarland.

While North Rhine-Westphalia is one of Germany’s major industrial areas, it’s also a very prominent agricultural state. Especially in the Northern region, around the city of Münster, farming, milling and raising pigs and chicken is “big business.”

The state of Rhineland-Palatinate is more known for growing wine, Two thirds of the wine produced in Germany come from this region: Ahr, Mittelrhein, Rheinhessen, Rheinpfalz, Rheingau and Mosel-Saar-Ruwer.

The major cities of North Rhine Westphalia are Düsseldorf, Cologne, Essen, Dortmund, Duisburg, Aachen, Bielefeld, Münster and Wuppertal. The major cities of Rhineland-Palatinate are Mainz Kaiserslautern, Koblenz, Trier, Worms and Speyer. Here are some of the many regional specialties you will encounter as your tour through the Rhineland area: 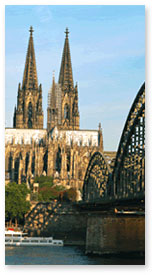 Don’t be disappointed if you order a Halve Hahn/Halber Hahn in a Cologne pub. You won’t get what you expected, namely a half a chicken. Instead you’ll receive a buttered rye roll, halved and topped with Gouda cheese and mustard served with pickles and onions.

There are many legends surrounding the origins of the name “Halver Hahn”. For instance it is reported that a guest requested a bread roll in a pub in Cologne and was brought a whole roll instead of just a half whereby he commented ” „ääver isch will doch bloß ne halve han” („aber ich möchte doch bloß ein halbes haben”) meaning “but I only wanted a half”. A similar theory suggests that the name was adopted during the war, when cheese was cheap but bread was not and thus pub patrons would ask “kann isch och ne halve han?” (can I just have a half). If you know of any other theories as to how the Halve Hahn got its name, let us know!

Literally translated, this dish means “Heaven and Earth”. The name is derived from the 18th century word “Erdapfel” (earth apples) for potatoes.

Reibekuchen, literally translated as “grated cakes” are also known as Kartoffelpuffer. While they are popular in all areas of Germany, they are most famous in the Rhineland, where they are also known as “Rievekooche”. You’ll find them being sold at street stalls, especially in Cologne, the most famous of which is situated outside the Cologne railway station. See recipe below.

Döppekooche/Döbbekooche is a form of potato cake that was once only eaten by the poor particularly around St Martin’s Day to take the place of the traditional goose, which would be a more costly menu item. It consists of grated potatoes, finely minced onions, eggs and spices and cover in sausage pieces or strips of bacon. The resulting potato-onion-egg mix is then baked in the oven for about 2 hours until it forms a crust, considered to be the best part of he dish. Purists insist that the dish should not be stirred during the baking period in order to keep the crust intact, however,it is also acceptable to stir it so as to distribute the crust throughout the dish

Döppekooche has a variety of regional names such as Kulles in Holzfeld (Holzfelder Kulleslauf), Puttes, Dippekoochen, Kesselskooche, oder Knüles (Bad Godesberg). Close cousins of the Döbbekooche are Dibbelabbes, considered the state’s signature dish and made with the addition of leeks and Potthucke from the Sauerland, a rural, hilly area spreading across most of the eastern part of North Rhine-Westphalia, which is made with sour cream.

Growing conditions for fruit-trees are ideal in the Rhineland. The climatic conditions favor the cultivation of varieties that have the right ratio of acids and natural pectins for producing an optimally spreadable product.

In centuries past, practically every farmer used the sweet and tasty ‘Apfelkraut’ during the winter period. The traditional production method, i.e. the gentle boiling process at normal pressure and in particular the knowledge of the right mixture has been passed down from generation to generation.

Sauerbraten, literally translated as “sour roast,” could arguably be called Germany’s National Dish, yet this most German of meals varies by region, more by virtue of ingredient differentiations than by preparation method. Generally It is made by marinating a beef roast in a sour-sweet marinade for 2 to 3 days before browning it, then simmering the meat in the marinade for several hours, resulting in a very tender roast and a delicious sauce. Rhineland Sauerbraten is generally sweeter and contains raisins and gingerbread whereas Swabian Sauerbraten has no sweetening or raisin. Regardless of the ingredients used to make Sauerbraten, the most important ingredient is time. The roast must marinade for three to four days before it is cooked. Sauerbraten is traditionally served with dumplings, boiled potatoes or noodles. In Swabia it is traditionally served with Spätzle.

This Westphalian tradition was one the subject of universal mockery before Prussia’s King Frederick William IV ensured its acceptance at the tables of the nobility. Originally baked every two weeks in a long and arduous process of kneading and even treading with feet before baking up to 24 hours, its chief advantage was that it could be kept for a long time. Another was that the length of time in the oven caramelized the starch in the rye flour to give a dark color and slight sweetness.

This is a gently flavored ham smoked over juniper wood and left to mature for several weeks.

Kölsch is a top-fermented clear beer brewed locally in Cologne (Köln). It is the palest of German beers and has a slightly fruity flavor Only breweries in and around Cologne may call their beer Kölsch since the name is protected not only by German law but also by the European Union. It is always served in the signature 0.2 liter glasses called Stangen.

Pfälzer Saumagen, literally “sow’s stomach” is just that, the stomach lining of a pig. However, similar the the Munich “Weisswurst”, the stomach lining serves merely as a casing to hold the contents. The filling consists of a mixture of minced veal, diced potatoes, diced vegetables, herbs and various spices such as marjoram, nutmeg and pepper. Sometimes eggs and carrots are also added as are a mixture of other herbs and spices such as coriander, garlic, bay leaves, cardamom, basil and parsley. While potatoes are a must in the traditional Saumagen, they can be either diced or mashed depending on local preference.

The filled Saumagen must be cooked in hot water but must not be boiled lest the casing burst. It is served sliced and often fried in a pan, in which case the casing may be eaten along with the filling. Saumagen is usually accompanied by mashed potatoes, sauerkraut and a dry white wine.

Saumagen was originally a peasant dish that was invented in the 18th century using leftovers. Today, only the best ingredients are used to make this popular dish. During the ’80’s and ’90’s the dish become more popular by Helmut Kohl, the then Chancellor of Germany who served his native dish to world leaders such as Ronald Reagan and Margaret Thatcher.

Originally from Mainz, this combination of cream cheese, quark and sour cream is a very typical spread in Rheinhessen and Rheingau.