The northern-most federal state is also the only one bordered by both the North Sea and the Baltic Sea (Ostsee in German). Consequently, ship-building and fishing had always been the state’s two most vital industries. In modern Schleswig-Holstein, though, tourism and agriculture have become the strongest economic sectors. As far as the most important city is concerned, the state’s capital Kiel has a long tradition of competing with the regions prime trade hub, the Hanseatic city of Lübeck. Schleswig-Holstein looks back on a restless history which was characterized by wars, foreign domination and voluntary separation of its different regions. The area was under Danish rule for a long period, followed by Prussian rule and claims by the Hanseatic City of Hamburg and at one point even Austria. Political unity wasn’t achieved 1946. The regions’ biggest cities, Lübeck, Kiel and Flensburg, profited from these political tugs of war, while the majority of the local population remained poor, with agriculture and fisheries as the sole basis for survival, a fact of life which is reflected in the regional cuisine. The produce available to the rural population was almost exclusively local and was served in the form of rich, robust dishes such as stews, dumplings, hams and an abundance of fish and seafood. Like everywhere else, the local cuisine has become lighter and more modern but in their core, Schleswig-Holstein cooking is still very much down to earth. 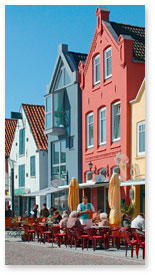 The Bay of Eckernförde to the North of Kiel, for instance, is famous for its sprats, members of the herring family. The small silvery fish are refined through a special smoking process involving beech log fires and the addition of alder and oak wood which gives the fish a golden shimmer. That is why this stretch of Baltic Coast is often referred to as the Gold Coast and a local saying attributes the master smokers with the ability to turn silver into gold. Historically, sprats from the Bay of Eckernförde were always packed and dispatched from the railway station of Kiel, which is why the fish became known by a misnomer still used today, Kieler Sprotten, or sprats from Kiel. Adventurous eaters enjoy the smoked sprats whole, including the head and tail. More squeamish gourmets fillet them and serve them on a plate with scrambled eggs. The best accompaniment, however, is wholesome black bread (rye bread) and a cold beer.

The North Frisian island of Sylt enjoys great popularity as a vacation destination but is equally well-known for its culinary treasures, oysters. Introduced to the Frisian islands in the 11th century by the King of Denmark, England and Norway, oysters have been cultivated there ever since. Oysters from Sylt are known as Sylt Royals and have performed extremely well in tasting events, even when compared with the classical varieties from France. Today, one in four oysters consumed in Germany comes from that island, a total of about 25 tons annually. A popular variety of shrimp known as Granat, meaning garnet, also likes the waters along the North Frisian islands. This popular red crustacean is stronger in flavor than its relatives, the giant shrimp or the pale pink North Sea shrimp.

The landscape of the salt pastures of the North Frisian coastal area would not be complete without the sight of grazing sheep, white and some dark balls of wool against the lush green meadows and the grayish-blue sea in the background. At the height of lambing season starting in March and April, the northwestern coast, the Halligen and many of the North Sea islands are dotted with ewes and their lambs, totaling over 100,000 sheep. The lambs which grow up on the salt meadows provide very flavorful lean meat which is held in high esteem among gourmets. Grazing sheep also fulfill the important function of natural landscapers which is essential for the protection of the coastal landscape. The other animal which is a characteristic feature of the state’s landscape is the black and white Frisian cow. Schleswig-Holstein is home to about one tenth of the over 5 million cows in Germany and is one of the most modern European dairy industries. Milk from Schleswig-Holstein is subject to especially strict quality control which goes above and beyond the requirements under federal regulations. The result is the label of ‘produced and tested in Schleswig-Holstein’ and the outstanding reputation the state’s dairy products enjoy nationwide. 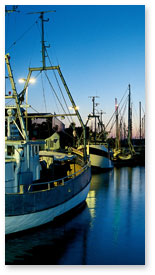 As far as produce is concerned, cabbage rules supreme in Schleswig-Holstein. The region in the state’s Southwest known as Dithmarschen is considered ‘cabbage central’. Each year a whopping 80 million heads of cabbage are harvested there each year, which means over 250 million pounds of white and red cabbage, cauliflower, brussel sprouts and Savoy cabbage. Dithmarschen is the largest cabbage-growing area in Europe, spanning approximately 7400 acres of land. It wasn’t until the end of the 19th century that a local gardener identified the flat marshy terrain with its humid, warm climate as the ideal terrain for cabbage cultivation. In Dithmarschen cabbage thrives almost without the use of pesticides, in part because mono-culture has always been avoided in favor of proper crop rotation. The nearly constant westerly wind helps to provide a natural defense against pests. The harvesting of cabbage (from September through November) is strenuous manual labor since the cabbage heads are extremely sensitive to pressure.

With interest in the nutritional value of the foods we eat, cabbage has also undergone an image transformation. While it was traditionally considered poor people’s fare which did not enjoy a particularly good reputation, nutritional scientists have confirmed cabbage to be rich in minerals, especially iron and calcium, as well as very high in vitamin C (about equal to that of citrus fruit) and vitamin B. Cabbage also is a great source of fiber and satisfyingly filling, yet very low in calories. Due to the growing universal popularity of Sauerkraut which has proven to be a super-food of sorts, much of the harvest in Dithmarschen goes into the production of this fermented cabbage delicacy.

As is true for all Northern parts of Germany, come May the bright yellow of the canola flowers (Raps in German) dominates the landscape in Schleswig-Holstein. Canola is still used in the more traditional sense for the production of canola oil (Rapsöl) but has also proven a perfect raw material for biodiesel and other alternative energy products. Canola is the most important oil seed cultivated in Europe and ranks third on the list of oilseed crops worldwide. It contains 45 percent oil. Due to its composition, its fatty acid profile and its neutral flavor, canola oil is among the most valuable culinary oils.

The art of making marzipan from almonds and sugar is over a thousand years old but it was not until the beginning of the 19th century that marzipan became more affordable. Marzipan has its origins in the Middle East, from where it spread with the Arab conquerors to Spain and the rest of Europe. Then the confection quickly advanced to a highly desirable dessert at royal tables. The extremely high price of sugar meant that only the wealthy could afford the expensive delicacy. Once sugar production from sugar beets was industrialized in the early 1800s, the price of marzipan also dropped quite dramatically. In 1806, Johann Georg Niederegger took over a confectioner’s shop on Lübeck’s market square and started producing marzipan in large quantities. The launch of his factory also marks the beginning of Lübeck’s history as the German ‘marzipan capital’. Niederegger remains the market leader in Germany to this day, producing up to 30 tons of marzipan a day. Lübeck marzipan is a protected brand name with stringent rules of production which allow for a maximum of 30 percent confectioner’s sugar to the total raw mass, while for the designation of high-grade ‘Edelmarzipan’ the maximum sugar content is not to exceed 10%.

An overview of Schleswig-Holstein’s culinary treasures would be far from complete without a tribute to one of the state’s most famous sons. The German author Thomas Mann immortalized his native city of Lübeck in his word-famous novel The Buddenbrooks. First published in 1901, the author, who at the time was only 26 years of age, painted a less than flattering, shockingly authentic portrait of local society. The success of Mann’s first novel came with much delay but earned the author the Nobel Prize for Literature in 1929. Food plays a significant role in the life of the Buddenbrook family who is based on the author’s own family archives. For the culinary part, such as the detailed description of the upper-class family’s opulent five-course dinner, Thomas Mann relied heavily on his mother’s recipes. Among the regional recipes featured for Schleswig-Holstein is the dessert served at that dinner, Plettenpudding (recipe courtesy of Nadia Hassani, author of Spoonfuls of Germany: Culinary Delights of the German Regions in 170 Recipes). 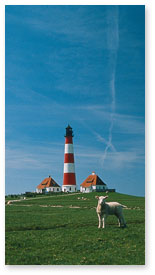