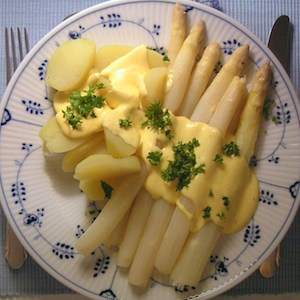 As apples mark the Fall season, nothing epitomizes Spring like the revered white stalks of Spargel (Asparagus)! The green variety is more popular in North America and Great Britain, and tends to be available in supermarkets year-round. Germans, however, prefer the white variety that is harvested from about mid-April to the end of June. (Traditionally season’s end is June 24, St. John the Baptist Day.) They’ve given this harvest season it’s own name — Spargelzeit, and celebrate it with passion. Rich in nutrients and very low in calories, asparagus has become a culinary status symbol for many Germans. Find out why.

It takes three years for an asparagus plant to produce its first tip. TO produce white asparagus, soil is piled up into knee-high banks, which give the fields their characteristic appearance. White asparagus grows entirely surrounded by earth, which protects the slender stalks from sunlight exposure and keeps them from turning green. This also affects the subtle flavor of it. The popular vegetable grows best in sandy soil and is cultivated in almost all federal states as well as in neighboring countries. However, there are two places in particular that are famous for growing Spargel! Read more on asparagus agriculture…

From Baden-Württemberg to Brandenburg, certain rural areas in Germany take special pride in being prime asparagus growing regions. Four states are even home to scenic “Asparagus Routes,” encouraging asparagus tasting tourism. The Baden route runs through the towns of Schwetzingen, Reilingen, Karlsruhe and Rastatt. The city of Schwetzingen claims to be the “Asparagus Capital of the World.” Like many of the towns along these routes, it holds an annual Spargelfest that attracts visitors from all over. During these festivals, asparagus aficionados can get their fix of delicious fresh Spargel dishes. Travel with us on Germany’s Asparagus Road…

A History of Consumption in Spargelzeit

During Spargelzeit, the average German enjoys the delicate flavor of this tender spring vegetable at least once a day. This adds up to a national total of over 70,000 tons of asparagus consumed per year! However, the annual production of asparagus averages just under 60,000 tons. So Germany imports asparagus to meet the continuously high demand for the healthy stalks.
The vegetable’s popularity may in part be rooted in its long history as a luxury vegetable. Going back as far as 2000 BCE, the prized vegetable was cultivated by the Ancient Egyptians, the Greeks and the Romans. Throughout the rule of King Louis XIV, it gained in popularity and was reserved to the tables of the courts. The first document that mentions the cultivation of this vegetable in the region around the city of Stuttgart dates to the 1686! More on Germany’s love affair with white asparagus ….

How to Prepare Asparagus Correctly

When buying asparagus during Spargelzeit, freshness is the key to perfect flavor and texture. Gourmets know that it tastes best when “picked in the morning, eaten at midday.” Look for stems that are firm, crisp and plump, and have the characteristic velvety sheen. The tips should be intact and firm, and a slight purple tinge is normal. If you don’t intend to cook them right away, wrap them in a damp kitchen towel and store in the refrigerator’s crisper. Preparation always start with washing the stalks, followed by peeling them with a swivel vegetable peeler. The white variety is peeled downwards starting just below the tip. In contrast, green asparagus is usually peeled from the bottom towards the tip. The more serious asparagus aficionados keep a special steamer handy. This is supposed to help cook the vegetable as gently as possible, preserving more of its flavor! Asparagus steamers are either slender and tall or shallow and oval-shaped. When using a normal pan, a good trick is to tie the stalks together using kitchen twine. The most common preparation calls for cooking the vegetable in a small amount of water for about 12-15 minutes, depending on the thickness of the stalks. The water may be flavored beforehand by adding some butter, salt, a pinch of sugar and the stems and peel left over from peeling.

The Most Popular Spargel-based Meals

Spargelzeit gets the culinary creative juices flowing! In Germany especially, practically every restaurant features the tasty vegetable prominently on a special menu. The most popular ways of enjoying white asparagus are deliberately simple, so as not to overpower the vegetable’s delicate flavor. Asparagus are traditionally served with melted butter and potatoes (Spargel mit Butter), with ham (Spargel mit Schinken) or with hollandaise sauce (Spargel mit holländischer Sauce). For the more adventurous fans of this quintessential spring vegetable, there are always more options. Germany’s innovative chefs are constantly coming up with new ways to serve the tender stalks as an appetizer or entrée. In some places, it is even served as a part of dessert now!