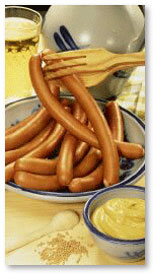 Mustard – America’s second favorite barbecue condiment – has been around since the 5th century and is one of the most widely used and popular condiments in the world.

Mustard’s use as a hot dog topping was first witnessed in 1904 at the St. Louis World Fair, where the R.T. French Company introduced its signature yellow mustard. Yellow mustard is the most widely used type of mustard in the U.S. and is known in the rest of the world as “American Mustard.”

In Germany, Düsseldorf and Bavaria are both famous for their mustard varieties, which tend to be less acidic than their American counterparts. Düsseldorf and its environs are known for its particularly spicy mustard, which is used in local dishes such as Senfrostbraten (roasted steak with mustard). Düsseldorf mustard is similar to Dijon mustard, but has a little more “kick” and is made from whole seeds instead of powder. One of the city’s most famous mustard manufacturers is Löwensenf, which has produced its Löwensenf Extra mustard for over a hundred years. Interesting, the company was first located in Metz, France, hence the similarity of its classic product to that of French Dijon mustard. The factory was relocated to Düsseldorf after World War II and now produces a variety of other mustards in addition to its signature brand.

In Bavaria, serving any other type of mustard than a sweet bayerischer Senf or Süßer Senf, with Bavarian Weißwurst would just simply be sacrilegious! First produced in 1854 by Johann Conrad Develey, founder of the Develey Senf & Feinkost company, which is now the parent company of Löwensenf GmbH, Süßer Senf is made from coarsely ground mustard seeds sweetened with sugar, apple sauce or honey.

According to HBPA, men more than women like to turn up the heat with spicy condiments, so this Father’s Day why not treat your dad to selection of unique spicy hot condiments including Löwensenf Extra, or Develey Weisswurst Senf.