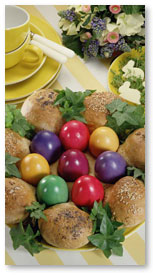 They are pagan symbols of earth’s rebirth. They symbolize Jesus Christ’s resurrection from the dead, representing the boulder that was rolled away from his tomb.

When Lenten culinary traditions forbade the consumption of all animal products, including eggs and milk, eggs were boiled to preserve them and dyed to differentiate them from the fresh ones.

Boiled eggs (gekochte Eier) play a starring role in German Easter dishes. They are dyed in bright colors and served at Easter breakfast or brunch and are also used to decorate an Osterzopf a slightly sweet, braided yeast bread.

A boiled egg hidden inside of meatloaf (Hackbraten) is the basis for a dish known as Falsche Hase, meaning “False Rabbit” or, more correctly, “False Hare.” The recipe originates from the meager post World War II years when meat was scarce. The meatloaf was made from mixed chopped meats which was wrapped around boiled eggs and formed to look like rabbit, a gourmet meat at the time.

On Gründonnerstag (Maundy Thursday), it is traditional in Hessen to eat boiled Eggs with green sauce  (Grüne Sosse). While grün means green, the name Gründonnerstag actually has nothing to do with the color. Rather the name is thought to have derived from the word greinen, meaning to mourn. Nevertheless, it is still customary to eat green-colored dishes on this day. Many German families also dye their eggs green on Gründonnerstag as a symbol of mourning. Eier in Grüner Sosse is a perfect way to use up any left over boiled eggs and makes a great choice for a Sunday brunch. In fact, we’ve chosen it for our recipe of the month in April. You can read more about Grüne Sosse in our travel article about specialties from Frankfurt.

Learn about specialties from Frankfurt

Eggs also feature at Easter time in non-edible ways. The egg white and yolk are carefully blown out to leave just the hollow shell, which is painted and decorated with lace and ribbon and hung on branches to make an Osterstrauch. Eggs are also used to play Ostereiertitschen, a game played predominantly in the Bavarian Oberpfalz and Rheinland. Players use the tips of their eggs to knock that of their opponents with the intention of breaking it. The winner is the one whose egg survives the longest. This game is played on Easter morning around the table with family.

Beyond Easter, eggs are the mainstay in many German dishes. For example, the fried egg (Spiegelei) is an important component of recipes such as Holsteiner Schnitzel, a specialty from Berlin, consisting of a fried egg atop a breaded pork schnitzel, garnished with capers or anchovies. Strammer Max is another such dish – a fried piece of bread topped with ham and a fried egg. Its cousin, the Strammer Otto, replaces ham with a slice of beef and in Bavaria, it is replaced with a slice of Leberkäse, a type of meatloaf.

The multitalented and nutritious egg can be boiled, poached, fried, baked or scrambled. It features in breakfast, lunch and dinner recipes as a stand alone or as a component of other recipes. When mixed with sugar and alcohol it becomes the delicious beverage known as Eierlikör or Eierpunsch (similar to eggnog but warm). Eierlikör, a mixture of egg yolks, sugar or honey and brandy is also known as Advocaat and, with or without alcohol, as eggnog in the U.S. It first came into existence in 1876 when a Dutchman by the name of Eugen Verpoorten opened the first eggnog factory in Heinsburg, Germany. Eierlikör was based on a drink discovered by Dutch colonists in Brazil in the 17th century. The original recipe was made with avocados, cane sugar and rum, hence the name Aguacate or Advocaat in Dutch. Upon returning to Europe, the colonists were unable to replicate the drink, since avocados did not fare very well in the European climate, until a resourceful Dutchman discovered that egg yolks could create that creamy consistency and color and thus eggnog was invented.

Today, the Verpoorten family still makes Eierlikör according to the original recipe passed down through 5 generations. More than 130,000 bottles are produced daily and exported to more than 30 countries, including the U.S. Eierlikör is not only consumed as a beverage, it is also used in various desserts, as a topping for ice cream and as a filling for chocolates and candies. Verpoorten is one of many companies that produce truffles and chocolates with Eierlikör fillings. Look also for brands such as Niederegger, Ritter Sport, Berggold and Sarotti.

Painted, poached, fried, scrambled or blended, the incredibly versatile egg has earned its place of honor on the Easter breakfast, brunch or lunch table. Just as popular however, is of course is the more modern tradition of confectionery eggs.