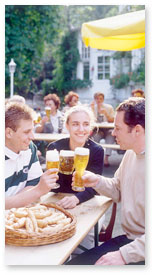 One of Germany’s finest gifts to beer lovers the world over is the Biergarten. From Brussels to Beijing and Manhattan to Melbourne, and no matter when your summer season falls, enjoying ice cold summer suds under a blue sky sure beats the heat. New York City is home to more than 54 such beer gardens and, as recently reported in the New York Times, “they have grown so thick, so fast, that certain neighborhoods could, with the proper vantage and the help of several pilsners, be mistaken for Bavaria.”

Quite the perfect comparison — Bavaria is the birthplace of the Biergarten after all. The city of Munich gave rise to the first beer gardens, mainly out of necessity. To keep the beer cool in the summer months, the breweries dug cellars along the banks of the river Isar and planted chestnut trees to provide further shade for the cellars and their precious contents. Not surprisingly, the breweries saw a way to make a profit from this cooling system and began to set up tables and chairs underneath the trees to allow them to serve beer directly to their customers from the cellars. So began the tradition of the beer garden.

While Munich is still home to some of the best beer gardens in the world (and the largest – Hirschgarten can hold 8,000 guests), they have become ubiquitous in cities and towns around the world. To be a “true” beer garden, however, the establishment should ideally have trees, wooden benches, gravel beds and no fast food. To get a genuine beer garden experience, Bavarians would also insist that you fill your mug with a Weissbier or Weizenbier, a wheat beer that is served in a tall glass so that the bubbles take longer to travel to the top; thus the beer will not get flat as quickly. There are several types of wheat beer, the most common of which in export markets like the U.S. is Hefeweizen, which as its name suggests, is not filtered to remove the yeast (Hefe) and thus has a cloudy appearance.

The original Munich beer gardens allowed patrons to bring in their own food, a habit that arose because of complaints from other breweries in Munich that lost customers to the popular beer gardens and subsequently petitioned to ban the beer gardens from selling food. To counteract the ban (and to get back at their competitors), the breweries permitted guests to bring food to enjoy with their beer, a practice that continues to this day thanks to Bavarian beer garden bylaws enacted in 1999. Most popular are traditional Bavarian fare such as Brezen (pretzels), Hendl (chicken) and Obatzda, a cheese spread made with camembert, onion and spices and served with German bread or pretzels. In Bavaria you’ll also see plenty of people tucking into a traditional Bavarian breakfast consisting of a pair of Weisswurst sausages, accompanied by sweet mustard, a pretzel and a Weizenbier. Where else but in Germany can you guiltlessly enjoy a glass of beer for breakfast!

Learn how to pour a wheat beer