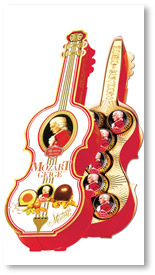 January is a great month to commemorate the birthdays of some of the world’s greatest musical talents with a rebel mindset and German/Austrian ancestry: Wolfgang Amadeus Mozart, Franz Schubert and Elvis Presley. Take a moment and relax with their sublime music, enjoy a fine piece of German chocolate and let yourself be inspired by their creativity.

Our recommendation for a “German Sweets & Music Moment” in January: listen to one of Mozart’s serenades like Eine kleine Nachtmusik (a little night music in G Major) and savor an authentic Bavarian pistachio marzipan Mozartkugel or Lübecker almond marzipan. Accompany Franz Schubert on his Winterreise and sweeten the moment with a dark single-origin German chocolate that soothes the mind. And enjoy a Love Me Tender from Elvis with sweets chocolates Katzenzungen or brown chocolate leaves from Brementown. This city was Elvis Aaron Presley’s first stop when he came to Germany in 1958 as a soldier of the US army.

The first that comes to mind is the Reber Mozartkugel, a chocolate truffle filled with the finest pistachio marzipan and hazelnut nougat and covered in dark chocolate. Confectioner Paul Fürst created the Mozartkugel in his Salzburg pastry shop in 1890 in honor of the composer. Today, these delightful nutty chocolate treats are available worldwide from leading brands like Reber, an artisan chocolate maker located in Bad Reichenhall near Salzburg.

Another classic chocolate treat to consider for moments of relaxation is Niederegger marzipan, made in Lübeck. Culinary experts agree that this marzipan stands out from all its competition and is of the finest quality, made from 100% almond paste.

Or consider Hachez Brown Chocolate Leafs . The maker of this brand, a family-run company located in Bremen, still controls all steps of the chocolate making process under one roof – from cleaning and roasting the cacao beans to forming the final products. Hachez’ signature item Brown Chocolate Leafs was first made in 1923, inspired by the shapes and colors of autumn leaves which the owner picked up at a public park in his native Bremen. Another popular item is “Katzenzungen” (cat tongues). Hachez Chocolade GmbH & Co. KG still operates a specialty store at the historic Deutsche Haus in the center of Bremen (Adress: Am Markt 1, 28195 Bremen, Germany )

The same chocolate maker also produces the Feodora brand. This chocolate is named after Princess Feodora zu Schleswig-Holstein-Sonderburg-Augustenburg, a sister of the last German empress and relative of the Queen of England. She grew up in the mid-19th century and became a regionally acclaimed poet and painter. When she died suddenly in 1910 at age 35, chocolatier Friedrich Theodor Meyer set out to create sweet chocolate and praline masterpieces to memorialize the popular princess. These culinary delights are still made according to the original recipes, from the top 3% of the highest quality cacao beans, by the FEODORA Chocolade GmbH & Co. KG.

Wolfgang Amadeus Mozart, born on January 27th, 1756 in Salzburg, Austria, was one of the earliest “rebels” of the music industry and his compositions, such as Die Zauberflöte or the Symphnony No. 40 still fascinate young and old listeners. At age 3, he learned to play piano and violin from from his father Leopold, a composer and music director from Augsburg, Germany. Mozart composed his first sonatas at age 5 and performed in public at age 6. The child prodigy soon toured around Europe, showcasing his extraordinary skills at major cities, princely castles and royal courts. His stormy marriage with Constanze Weber, musical rivalry with Antonio Salieri, dire financial situation and unceremonious death at age 35 are well portrayed in the movie Amadeus , directed by Milos Foreman and released in 1984.

Franz Schubert, born on January 31, 1797 in Vienna, Austria, was a prolific composer of beautiful Lieder (folk songs), some of which he grouped together into cycles, such as Die Winterreise (a winter’s journey) or Die schöne Müllerin (the beautiful miller’s wife). His parents hailed from Moravia and Silesia, further North of Vienna). Discovered by Antonio Salieri (yes, the same guy who is considered one of Mozart’s fiercest rivals at the royal court of Vienna), Schubert thrived in Vienna as celebrated musician, writing over 600 Lieder, some of which he put together into so called cycles, as well as nine symphonies, including Die Unvollendete Symphonie No 8 in B minor (The unfinished symphony). Schubert died rather young at age 31, contracting a deadly disease.

Elvis Presley, born January 8, 1935 in Memphis, Tennessee, is not usually associated with the country of Volksmusik and oompah bands. On his mother’s side, his heritage is Scottish, French and Cherokee – hence his signature licked pitch black hair. However, genealogical records prove that Elvis’ paternal ancestor, Andrew Presley, came to America with his father Valentin Bressler and his mother from Palatine Germany in 1710 on a ship named Fame (the name Bressler eventually turned into Presley). So, we’re happy to count him as one of our own. Of course, many of his songs derive from African-American gospels and blues. His hip swings trail-blazed an era of wild dance and teenage fainting that would last for decades and his Love Me Tender, Jail House Rock, Heartbreak Hotel or Blue Suede Shoes will remain classic for centuries to come. He also died fairly young, at age 41 in 1977, but, like our other two January congratulates, he will live forever.