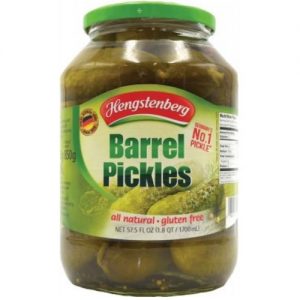 There are remarkable differences in the taste, texture, mouthfeel, and flavor of pickles available in supermarkets here and in Germany. Here are some of the factors that determine the “quality” of pickled cucumbers and other vegetables.

The right shape (not too crooked and gourdy looking) is important for appetizing cucumbers (Cucumis Sativa). But entire harvests can produce misshapen varieties caused by a lack of pollinating insects of too little or too much moisture. With too few insects transferring the pollen from the male to female cucumber plants, some plants may bloom, but don’t bear fruits (i.e. cucumbers)

Great cucumbers taste just right, not too bitter or bland, Bitterness can be caused by high temperatures, low moisture, and low fertility or foliage disease. Bitterness is also associated with fruit harvested late in the season from unhealthy, poor-yielding plants.

Quality pickles are made from well-shaped and good tasting pickling cucumber (in German EinlegegurkeThese are shorter and sturdier than slicing cucumbers (for salads, in German Salatgurken). Gherkins (West Indian or Burr cucumbers) are from the pickling type, just more spiny and smaller. They require less space to plant.

Anything from airborne fungi, insect pests like root-knot nematodes, squash vine borers, soil-borne diseases, like Pythium or plant attacking diseases such as anthracnose, or gummy stem blight, can affect the quality of the harvest or taste and shape of pickled cucumbers.

A bit of history on the word cucumber

The wild form of cucumbers originated in India and the plant became known in Central Europe and Germany in the 16th century. The English word cucumber stems from the Latin name Cucumis, while the German word “Gurke” stems from the Polish word ogurek.