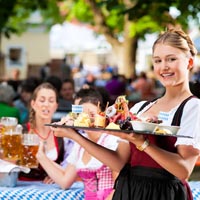 It’s party time for German food fans all over the world. On September 22, just before noontime, the Lord Mayor of Munich Christian Ude will take a Schlägel (rounded wood hammer) and drive a Zapfhahn (metal tap) into the 200 liter (53 gallon) keg of beer. Then he’ll shout “O’zapft is” (It’s tapped!) and Oktoberfest on the Theresienwiese will have officially opened. Traditionally, the first Mass (1 liter) of Oktoberfest beer will be handed to the governor of the State of Bavaria and until October 7th, roughly 7 million visitors will consume about 6 million more liters of Germany’s finest brews.

The world’s largest party is also one of Germany’s successful exports. From Blumenau in Brazil to Brisbane in Australia, from Cincinnati (the second largest Oktoberfest after Munich) to Shanghai – people of all ages, ethnicities and nationalities will dress in Dirndl and Lederhosen, drink and eat “Bavarian-style” and simply have a good time. In North America, big Oktoberfest parties take place in Kitchener-Waterloo in Ontario; La Crosse, Wisconsin; Fredericksburg and Addison, Texas … as well as in hundreds of other towns and cities all over the continent. Check out our list of Oktoberfests in North America.

The “cool factor” of the Oktoberfest

One has to attend the Munich Oktoberfest three or more times to appreciate its appeal to so many people living in Bavaria and all over the world.

For once there’s the amusement park atmosphere: screeching people on roller coasters, loud pop music from go cart pavilions or shooting galleries, the sweet smell of popcorn, roasted almonds or cotton candy and the savory smell of Bratwurst mit Pommes Frites (grilled sausages with french fries), Steckerlfisch (grilled fish on a stick) or Brathendl (rotisserie chicken). There are dozens of special attractions: Motodrom for cars and motor cycles climbing vertical walls, circus arenas for fleas or mice, Futureworld, Amazonas or Alpenrausch (walk-through pavilions with high tech, exotic animals or horrorshows), Hau den Lukas (high strike) and imagination theatres with lasers, lights and sound effects like the Sensorium and Pschodelic. The amusement park section of the Oktoberfest is a draw for children from morning to afternoon, for teens & ‘tweens from late afternoon to midnight and for adults – at times inebriated – from midnight to the wee hours.

A different “cool factor” kicks in when you enter one or more of the 14 large beer tents or 20 smaller specialty food huts. The Hofbräuhaus Zelt holds up to 10,000 people. It’s by far the largest. In the Augustiner Zelt, the bar tenders still draw beer from original wooden 200 liter kegs, called Hirsch (stag), as they did 200 years ago (everywhere else, the beer is cooled and stored in modern steel tanks). Physical strength is on display when muscular men lift fresh 200 liter kegs up on the bar shelves or when waiters or waitresses carry up to 6, 8 or even 10 Mass beer to one of communal wooden bench tables. Oliver Strümpfel holds the world record in Masskrugtragen (hauling beer steins): he carried 21 fully filled steins over a distance of 40 meters! Dropping even one of the Masskrug this year would cost him dearly. The price for a Mass of beer is 8.90 Euro – roughly $11.00 – across all beer tents

Spotting celebrities is another “cool” thing to do at the Oktoberfest: Kim Kardashian or Katie Perry in dirndl, Leonardo di Caprio in lederhosen, Boris Becker and Steffi Graf, Bayern Munich soccer players, and lots of politicians, pop stars, actors and actresses, high nobility, captains of the industry and fashion models can be seen at upscale, “chique” beer tents like the Hippodrom, Käfer’s Weinzelt or Schottenhammel. Some of the booth alongside the tents are filled with executives, customers, suppliers, and employees of different ranks, status or hierarchies. After a few Mass Beer, “Brez’n” (pretzels), “Radi” (Red reddish) or Hax’n (hind leg of an ox or porker) they will mingle, sing together and enjoy themselves. The Oktoberfest can be a big equalizer.

In any case, the “coolest” aspect of the Munich Oktoberfest is its staying power. It’s now 202 years ago, that Crown Prince Ludwig – later to become King Ludwig I – threw a big party in the middle of town to celebrate his wedding to Princess Therese of Bavaria. The people of Munich enjoyed hose races, marching bands, carnival attractions and subsidized beer and food. Over the next 150 years, this party survived beer price increases, revolutions and major wars. Close to 10 generations of fun loving Munich folks kept the tradition alive and spread a bit of German/Bavarian culture all over the world. It is to hope that future generations will continue to celebrate in style with one last hurrah before the winter season starts.