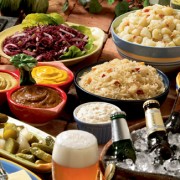 Home cooks and chefs in Germany and North America have many things in common, one of them being their passion for barbecuing and grilling. What better way to enjoy the long, warm days of summer than to move cooking with friends and family outdoors? The German word for this popular activity is “Grillen” and summer is definitely “Grillparty” season. These delicious recipes from Germany may give you fresh ideas for a German spin on your next barbecue.

What would a barbecue be without a great sausage hot dog topped with sauerkraut and mustard accompanied by potato salad and pickles and washed down with a refreshing glass of beer? All these “American” foods and beverages have traditions in German culture.

While the German roots of this quintessentially American meal may be almost forgotten, professional and leisure chefs can add zing and a new twist with the addition of some authentic, modern German ingredients.

Hot off the Grill