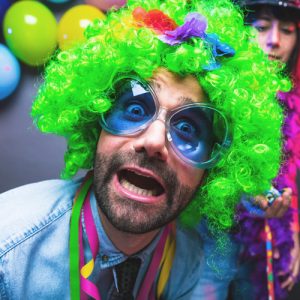 Sick of winter, and got a case of the blues?

Here is a collection of German Karneval recipes with dishes representing traditional Karneval strongholds and perfect for a Karneval party at home. Invite your family and friends to come dressed in a fancy or funny costume. Put on disco, swing, schlager, hip-hop or hard rock. And do what your pagan ancestors did thousands of years ago: dance away winter and get ready for spring. You can mix in Brazilian-style samba party themes or a Dixie-Blues Fest in the fashion of New Orleans. 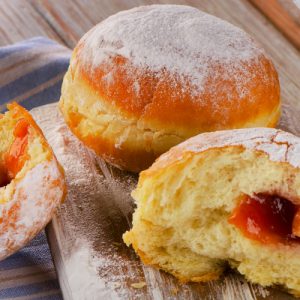 The meaning of the word ‘Karneval’ (Latin: carnem levare) is to say, ‘good-bye to meat’ prior to the lean cuisine of Lent. Thus, the pre-Lenten days of Shrove Thursday, Rose Monday, Fat Tuesday, and Ash Wednesday defy all nutritional mandates of modern-day eating trends. Instead, they urge you to take that last bite of scrumptious meat and dig into the calorie-laden goodness of chocolate, cakes, and donuts. The recipes below represent the popular Karneval hubs of Düsseldorf, Cologne, Mainz, Freiburg and Munich.

Döppekooche/Döbbekooche is a form of potato cake that was once only eaten by the poor particularly around St Martin’s Day to take the place of the traditional goose, which would be a more costly menu item. Nowadays a winter and Karneval specialty dish, it consists of grated potatoes, finely minced onions, eggs and spices and covered in sausage pieces or strips of bacon.

Westphalian ham wraps around a Black Forest ham mousse in this appetizer with a built-in handle. Recipe created for Germanfoods.org by Chef Hans Roeckenwagner.

Known as Pfannkuchen in Berlin, Kreppel in Hessen, Krapfen in Southern Germany and Berliner just about everywhere else (excluding various dialectical variations), the jelly-filled donut, the cause of much unintended mirth when John F. Kennedy famously declared ‘Ich bin ein Berliner’ is a quintessential culinary component of Germany’s carnival season.

Of the many versions of Sauerbraten, this one by Chef Szmania uses dark German Altbier in the marinating stage.

Nothing’s more delicious than a Krapfen (jam-filled donut) at Karneval – especially those filled with rosehip jam and paired with Glühwein or hot rosehip tea.You can easily make your own rosehip donuts at home – a great joint activity for both parents and children

Sauerbraten recipe from the Eifel region (west of Cologne) using beet sugar syrup, red wine vinegar and is fast and easy to make.

This traditional Swabian egg-based puff pastry made with milk, flour butter, salt and eggs. This dish is related to Yorkshire Pudding or Popovers in the US and served as main dish with compote, vanilla sauce and a little powdered sugar.

A quickly prepared, filling meal that may cure some hangovers. Two eggs sunny side up are served on two slices of ham, layered on top of “Reibekuchen” (potato pancakes).

In 1832 Gustav Louis Zietemann unveiled his new creation named Spritzkuchen, made of choux pastry, baked in fat, and covered with icing. Tese star-shaped deep-fried donuts are coated with powdered sugar and lemon juice or rum.