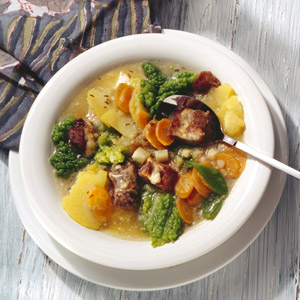 Pichelsteiner Topf
Once upon a time in the late 18th century, a poor farmer's wife in South East Bavaria had to feed a band of marauding soldiers (the infamous Trenk Pandurs) from the Austrian Empire. Only a few pieces of cabbage and carrots and scraps of beef, mutton and pork was all that was left that day (potatoes were not known in Germany at that time). Nevertheless, she threw all she had into a big pot and apparently concocted such a good meal that she and her family not only survived the attack bit also preserved the recipe for future generations. A century later, in 1879, legendary cook and restaurant owner Auguste Winkler living close to the very, very small village of Grattersdorf (somewhere between Regensburg and Passau, close to the Czech Republic) was asked to prepare a meal for a large outdoor party that took place on the top of a forested mountain called Büchelstein, It was July, but it must have been rainy and unseasonably cold. So she re-created a locally known one-pot recipe with cubes of lean pork, beef and lamb or mutton, and chunks of celery, leeks, carrots, savoy and other cabbages. That heat-warming meal eventually became the famous Pichelsteiner(derived from Büchelstein) and the party became one of South-East Bavaria's largest festivals. Although this festival tales place in July, the one-pot Pichelsteiner is a perfect meal occasion for cold winter days. Enjoy!
Course Entree, Stew
Region Bavaria
Servings 6