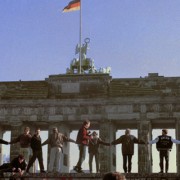 It was a sweet moment for thousands of East Berliners, when the border gates to West Berlin opened on November 9, 1989  – for the first time since 1961. Let us celebrate with nine authentic cakes and pastry recipes from the East German states, just fitting to the holiday season. Guten Appetit!

This  Thuringian version of Stollen is also called “Schittchen,” which refers to the shape of these cakes, resembl small logs (“Schittchen” is Thuringian for little log). In old Thüringen, there was actually a cake trough in each rural household that the the Schittchen would be shaped in. For large families, the Schittchen were then so large that they had to be baked in the village bakery.

This moist, nutty carrot cake was “invented” in Leipzig a hundred years ago by a resourceful baker, securing the city a reputation for creativity and putting its cafés and bakeries in perpetual competition

It looks like a hedgehog, but this popular East German chocolate cake with Almond bristles bears the name of venison for hundreds of years.

In 1832 Gustav Louis Zietemann unveiled his new creation named Spritzkuchen, made of choux pastry, baked in fat, and covered with icing. Ten years later, he started selling his pastry to passengers at the local train station. This was the path to success. The pastry became popular and a favorite with more than just the locals of Eberswalde.

Baumkuchen is “correctly” baked by pouring or brushing layers of batter onto a rotating spit in a large oven made specifically for the task. This recipe shows how you can bake the classic cake in a standard household oven.

Rustic pumpkin pie from East Germany flavored with cinnamon, ginger and butter. While in West Germany pumpkins have started to go out of fashion, in the eastern dachas their popularity has continued unabated.

Before there were Christmas trees, which came into fashion in mid-19th century in Mecklenburg, children received their Christmas gifts in their stocking caps – today’s lavish gift-giving did not exist at that time. Children put their hats on the window sill, and the parents filled them with pastries, including these egg wreaths.