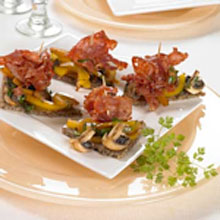 A selection of snack sandwiches built on the foundation of Mestemacher whole grain breads. Many of these recipes could quickly adapt into party appetizers.

Traditional meatballs become a festive snack or appetizer when served on Mestemacher rounds with a pepper cream sauce.

Make the ordinary fabulous with a light salad of bologna, pickles, capers and cream cheese and lettuce on Mestemacher Natural Whole Rye.