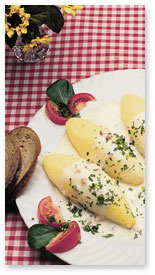 These dumplings are called “hairy” because of their rough outer texture, and are sometimes stuffed with a ground meat mixture.

A traditional sauce for potato dumplings such as Hoorische or Gefillde.

A bacon, onion, and potato soup.