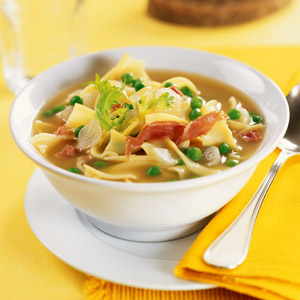 Creamy, heavy split pea soup is traditional in Germany. This modern take is a much lighter, more healthful version, with lean German-imported smoked prosciutto, which is available diced, as well as fresh spring peas. It would be an appropriate Abendbrot meal, along with some hearty German bread or a thin cheese sandwich.
Course Soup