Dampfnudeln and Germknödel, what’s the difference? However they are called they are popular in Alsace, Germany, Czech Republic, and Austria. Both names refer to dumplings made with a sweet yeast dough. They can either be steamed, as is common in Austria, in which case they are called Germknödel (with the ‘Germ’ standing for yeast). Or they can be cooked in a liquid mixture of cream, milk, butter and sugar, in which case they are called Dampfnudeln. With regional variations, they are commonly served with vanilla Sauce, fruit sauce, fruit compote, and/or sprinkled with poppy seeds. In Bavaria, they made be stuffed with a bacon-onion mixture. 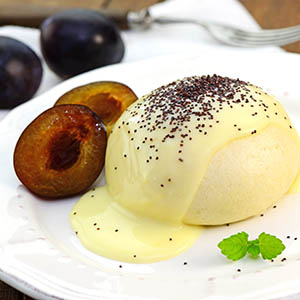 For the vanilla sauce:

For the plum sauce:

For the vanilla sauce:

For the plum sauce: