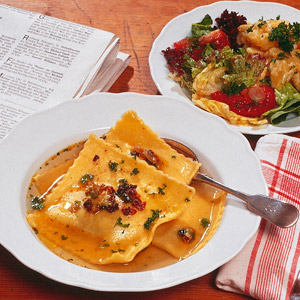 As the frivolity of the Karneval season comes to a close, so the solemn days of Lent (Fastenzeit) begin and with it a new attitude towards eating and drinking. As the word Fastenzeit suggests, the forty days between Ash Wednesday (Aschermittwoch) and Easter (Ostern) are a time of fasting, abstinence and prayer for religious observers. The consumption of meat on Fridays is avoided and many people also abstain from eating sweets or drinking alcohol as an act of self-denial and penance. This practice, of course, explains the over-indulgence during the Karneval season prior to the beginning of Lent!

Lent may be a period of fasting, but there are many traditional German foods and beverages associated with this period in the Christian religious calendar. For example, legend has it that in the 19th century, monks at a monastery in Maulbronn in the German state of Baden-Württemberg conceived a specialty known as Maultaschen, akin to the Italian ravioli. By mixing meat with herbs and spinach and hiding it within little pockets (Taschen) of dough, the clever, carnivorous monks were able to hide the forbidden meaty morsels from God, thus avoiding the strict Lenten observance. This colorful anecdote, while not corroborated, accounts for the Swabian nickname Herrgottsbescheißerle which, roughly translated, means “Little Cheaters on God”. This is arguably the most entertaining explanation for the origin of Maultaschen. Another, equally unsupported, but plausible account contends that a Countess by the name of Margreth Maultasch brought the recipe back with her from a visit to Austria. Then again, Maultaschen may simply have been named as such since they resemble animal feedbags. Maul is a colloquial word meaning mouth (more often used to describe the mouth of an animal than that of a human, the latter being a rather vulgar use of the word) and Tasche means bag (or pocket).

Wherever they derive from, maultaschen are a German favorite, particularly in the Swabian region of Germany where they are considered a regional specialty that has significance to the cultural heritage of Baden-Württemberg. As such, according to European Union law, the word Maultaschen is protected under a Protected Destination of Origin or PDO indication. This means that Schwäbische Maultaschen can only be labeled as such if they genuinely originate in Swabia, Baden-Württemberg or the Swabian speaking area of Bavaria. Like Italian ravioli, Maultaschen can be made with all sorts of fillings, both savory and sweet.

Learn how to make genuine Swabian Ravioli with Braised Onions from the experts in the recipe and video content listed below.