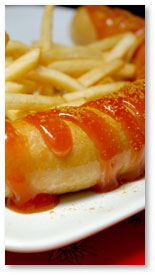 Fire up the grills, summer has officially begun! So flip your wiener and enjoy an easy outdoor dinner with a cold German beer. The kicker: add a touch of original German curry ketchup (called curry sauce in the US). This is quite a unique tasting condiment rooted in Berlin and it was just a matter of time before it reached American shores. From New York to LA you can now savor the flavor of a hot dog, bratwurst or bockwurst with a kick of hot or sweet curry ketchup, for example, at the Berlin Currywurst restaurant in Los Angeles or at your own home.

As much as it is quintessentially “American,” ketchup actually originated in 17th century China; although it was more of a brine than the tomato-based ketchup we know and love today. The first American tomato ketchup recipes were published in the early 1800s and the first commercial ketchup was produced in the 1830s. A son of German immigrants from Kallstadt (near Bad Dürkheim, in the heart of Germany’s southwestern wine growing areas), Henry John Heinz founded one of the world’s most venerated brands in 1876, banking on the growing popularity of tomatoes in that century.

In recent years, salsa actually took the “crown” of the condiment category. Nevertheless, ketchup remains the flavor king on the backyard barbecue table. According to a survey by the the Hearth, Patio and Barbecue Association (HBPA), 66% of respondents said they still prefer ketchup as the prime hamburger topping.

If you want to add German authenticity to the American barbecue, add curry ketchup from Hela, Zeisner or Burkhard. Hela is Germany’s # 1 brand. You can buy any of these brands at World Market stores, at selected specialty food shops in your town or city or online.

You can also go a step further and grill Germany-made sausages, such as Bockwurst Frankfurter, Wiener or Nürnberger Bratwurst that are exported to the US. The first four varieties are made by Meica, a leading brand for sausages pre-cooked in jars. The Nürnberger Bratwurst comes in frozen format made by HoWe (a sausage company owned and operated by Uli Hoeness, the president and CEO of Bayern München).